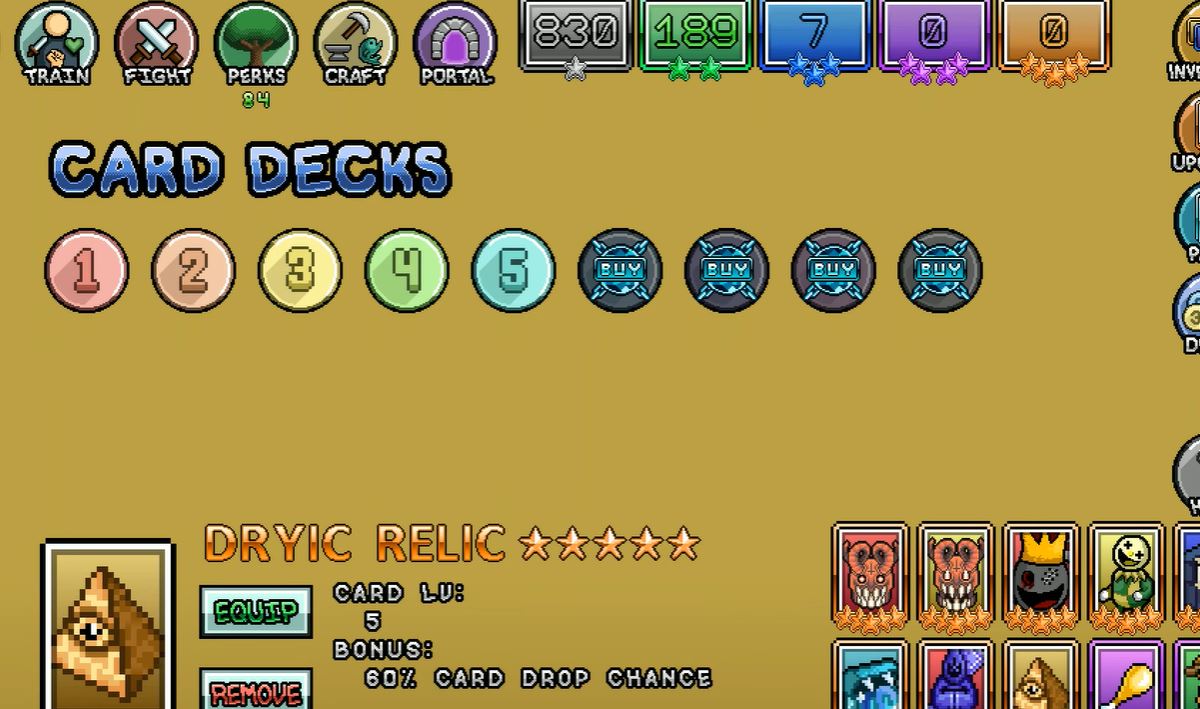 Idle Skilling is a free to play where you will be active and idle while getting tons of levels and things done in the game. It is very fun and it has a very complex deck card system.

Stay tuned to find out what is the best card deck for mid and late game.

When you arrive in the mid and late part of the game you will notice that things will not go as smoothly as they were in the beginning. You will have to adapt and improvise a lot.

The best things that will get you going and help you out are the cards.

Making a very good card deck is crucial for these moments when you keep dying and can’t see yourself going forward.

That is why in this guide we will be talking about what is the best card deck for both mid and late game in Idle Skilling. Let’s get started.

This is a very good Mid Game Card Deck which is going to improve your Ascension and Rebirth by a whole lot.

As you can see you will get a ton of buff percentages on Rebirth and Souls Kept.

Also, another thing that this mid-game deck is good at is the fishing. You will get a whopping 400% Fish bonus rate!

This means that you’ll be fishing and getting loot almost non-stop.

This late game deck card is extremely good for your Ascension and Rebirth.

If you were good enough in the mid-game with the previous deck, well here is where you’ll shine in this regard.

You will get tons of BP points on the Rebirth which will mean that the buffs which you’ll end up getting will be tremendous. Other than that, you’ll be able to activate it way more.

Also, the fishing raises from a 400% bonus to a stunning 2200% bonus! It is crazy how good this deck is for fishing.

How do Cards work in Idle Skilling

Cards were added in version 1.3, and every monster can drop one except Old Friend, which drops Ice Rock’s instead. There are two types of cards:

Cards are very important for dealing damage, and they can also help mining, spiriting, and crusading in the long run in big ways.

First, you should pay attention to any damage you can do and the chance that a card will drop. Also, try to get damage from different places.

Spreading out the bonuses on your cards gives you a bigger bonus overall.

Card drop chance is important because it lets you get the most cards possible each day.

For some reason, it also makes cards rarer, so that’s even more reason to get cards with this stat.

Dryic Relic has the second highest chance of dropping in the game until you reach Purgatory, and you get it in the desert, so it’s very important to max it out.

How to Get More Cards

Each zone has a limit on how many star cards you can get, so make sure to farm in every zone every day.

To get the most cards, go away from a monster that you can kill in one hit.

When you start the game, there will be a lot of cards on the screen. If you want more rare cards, you can close the game and open it again until you get what you want.

Those are the best card decks that you are able to create for the mid and late-game in Idle Skilling. Both of those decks are superb when it comes to Rebirth and Ascend.

You will want to be farming way more cards and then applying them in the order that they are shown. As you might see from this guide, cards aren’t that difficult to understand after all.

I hope that this guide has provided you with your new favorite card decks that you might be using for late and mid-game.

Do let me know in the comments below, which is your favorite card in Idle Skilling and why? Have fun playing around with these amazing decks!