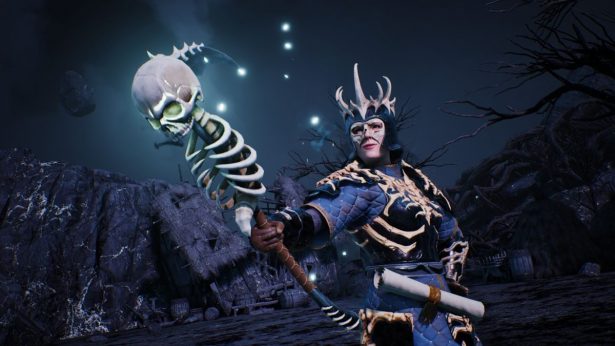 The Morane Trial is the second in the series of The Scryer’s Trial set of quests in King’s Bounty 2 and it’s the first challenging one (with even more challenging trials to follow).

If you are having trouble beating this quest, I am here to help and guide you through the entire battle for an easy win. It’s not too difficult, you will see and you even have two different paths to choose.

So without further ado, let’s get straight to business and see how to beat the Morane trial in the Scryer’s series below!

1. First option (the way I did it first)

The biggest challenge, no matter which of these two options you choose, will be the Hollow Giants. These are a really tough nut to break and they should be your main focus.

Here’s how I approached the fight and won – just barely, but it doesn’t matter in the end:

When setting up the troops, move your ghosts in such a way that they can end up in between the Hollow Giants and the Archers. Next, drag all your remaining troops to the left for focused attacks there.

Now, on your first round, you want to cast Madness on the Hollow Hounds / Void ones first, then teleport your Ghost in between the Hollow Giants and Archers, then attack the latter.

Also use her second skill as soon as possible to win a tour. (Focus with the ghosts on taking out the Archers – they’ll be able to defend against the Giants for a while now).

IMPORTANT: Wait with your other troops until the Madness spell is in effect (or attack the single troop in the middle).

With your Ghouls or whatever they’re called, take out the three troops to the left while the Ghost keeps the Giants busy.

Once the three troops are done with, move the Ghost away from the Giants, so they start heading towards your other troops. Attack with them, then bring back the Ghost as well to support the attack (you will probably have just 1-2 left though).

Make sure to cast spells during this entire time: I recommend Disease first, then Fracture.

I was able to win the fight on my first try following this strategy, still having one Ghost and some Ghouls left in a stack. Very tight fight, but it was a win.

An alternative to this would be to focus on taking out the troops to the left first and cast Madness early on on the Giants, so that they take out the Archers for you. Left unattended, even the archers can cause a lot of pain.

Follow the same route with casting the spells as above (Disease first, then Fracture), making sure to take advantage of the special attacks of your troops to take out units faster.

Your Ghosts are the best unit in the fight – let them get surrounded by the enemy, then block them for a turn with their special scream and take them out with the rest of the troops.

Finally, focus on the Giants last (they are slow and won’t be able to reach you until you’re done with the rest of the troops).

If somehow the Archers are not killed, you will have to teleport the Ghosts there and take them out. Don’t leave the Archers alive – they will make you lose the fight!

This strategy should work as well. The first one is personally tested and also works – just pick the one that you feel most comfortable with and go for it!

Related reading: Learn what’s the best character in the game.

Although really challenging, Morane’s Trial is only the second in the game and much more difficult ones will follow. I’ll make sure to have guides ready for each of these fights as soon as possible.

Remember, these are not part of the main mission and you can complete them at your own pace.

In other words, if you simply can’t beat one trial, maybe it’s best to just ignore it for a while and focus on other missions (maybe completing the main quest lines) and get back to it afterwards, when you maybe understand the game’s mechanics better.

Don’t forget to read our other guide on how to sell items in the game and how to get more gold. Also check back often as we’ll publish more soon!

Now back to you – do you have other strategies for beating The Scryer’s Trial: Morane in King’s Bounty 2? Let us all know by sharing your thoughts below!

2 thoughts on “King’s Bounty 2 The Scryer’s Trial: Morane Guide (How to Beat Easily)”