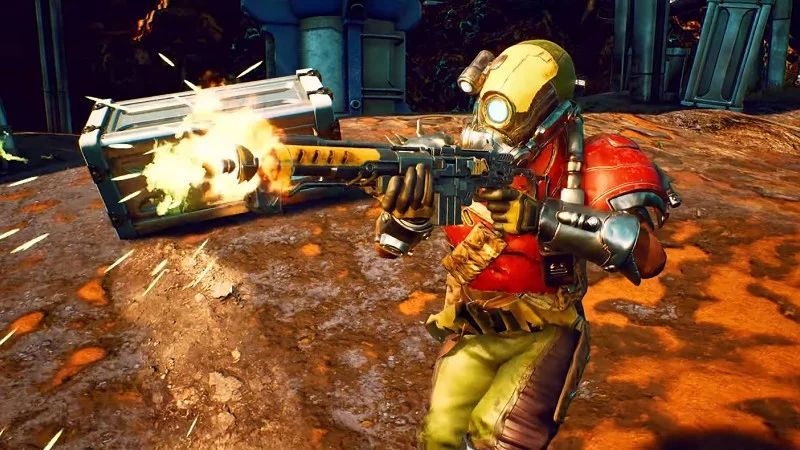 There are fewer weapon types in The Outer World than what I had initially expected, but even so there’s a bit of variety and with modding involved, you do have many options when it comes to choosing the best weapon in the game.

And this is exactly what we’re going to talk about in today’s article: answer the question “What’s the best weapon in The Outer Worlds?”

Some enemies are weaker to some types of damage, while others resist that damage type better.

So you will have to be prepared for all encounters: if you fight an automaton, the weapon that deals most damage to animals won’t be the best choice, most likely.

So today’s article about the best weapon in The Outer Worlds will be more of a weapons guide, helping you understand the different damage types, but also the different weapons that are available in the game and which ones I consider the best.

Because, yes, there are still better options than others, even if you don’t look at the type of damage dealt by each weapon.

We’ll start this guide to weapons looking at the types of weapons available in the Outer Worlds, as well as the damage types that they deal and eventually we’ll see which are the absolute best guns in the game.

So if you don’t want to go through all the learning – just skip to the end to see my list!

As I said, there’s not that huge of a diversity when it comes to the weapons available in the game (at least not if we compare it with games like Fallout 4, for example).

You will have a bunch of basic weapons – which you will probably use the most of early on. We’re talking about weapons with generic names, like the Assault Rifle, Hammersmith, Light Machine Gun, Tactical Shotgun and so on.

These are the easiest to find in the game and you’ll have plenty of them, the only thing making one better that another of the same type being their level (and potential mods).

Next, we have the “Special” variant of the above weapons, which is easy to spot since they usually have another word in their name, such as Assault Rifle Ultra – these are automatically better choices since they deal more damage and can even have more mod slots.

Finally, we have a bunch of unique weapons available in the game. These are more difficult to find and can be considered special weapons, although not necessarily the best options out there.

We’re talking here about Science Weapons (such as the Shrink Ray), and weapons with a Golden background and unique names.

These usually deal a lot more damage and are the better options generally (but do keep an eye on their level, as higher level regular weapons can still be better than low level special ones).

In total, there are six specific categories of weapons, and any you will find in the game will fall in one of these categories: 1 and 2 handed melee, handguns, long guns, heavy weapons and science weapons.

All weapons use just three different type of ammo, which makes everything a lot easier to follow and plan out: we have light ammo, heavy ammo and energy ammo (with melee weapons requiring no ammunition, obviously).

However, even though the weapons will use the same type of ammo, they can deal different types of damage. This is usually achieved through installing mods.

In other words, you can have an assault rifle deliver shock damage or physical damage and sometimes you can influence the type of damage a weapon deals by installing mods. Other times, the weapons themselves will deal different types of damage (unique weapons).

Here are the different types of damage available in the game, with the type of enemy they are strong against:

So, as you can see, the type of damage that your weapon deals can make it a better or a worse option, depending on the type of enemy that you are facing.

Either way, the base damage that your equipped weapon will matter the most, so even if you don’t get a bonus from the damage type, some weapons will still normally do more damage than others – and these are what we consider “the best”.

Afterwards, it’s up for you to have a few of them ready to be equipped, based on the type of enemy you’re going to face, in order to increase your advantage.

Now that we know everything about the basics and how weapons work, let’s try to rank them a little bit and see which are the best weapons in the game.

Have in mind that I am considering the base values of a weapon, and not the different types of damage that it can deal – that’s up for you to decide by installing mods or equipping weapons that deal one type of damage over the other.

I am going for this approach because most of the unique weapons are difficult to find, come later on in the game in most cases and for the majority of your play time, you will have regular weapons equipped.

Even if you don’t get one of the unique Assault Rifles, you’ll probably want to have this weapon around from the beginning to the end – just keep an eye on its level and make sure it keeps going up as you progress through your adventure.

This weapon uses Heavy Ammo and deals the perfect amount of damage, in my opinion, being easy to fire and offering a decently-sized magazine.

It might take a bit of time to get used with, but it’s extremely useful against all types of enemies.

You can hold to charge the weapon a bit and launch that plasma ball that does a lot of damage, or you can quickly shoot it to take down enemies faster.

No matter how you put it, this is an extremely useful weapon that I have used just as much as the Assault Rifle – and even though I didn’t really like it at first, I found it a perfect choice long term.

If you want to put that light ammo to some good use, you could either use a pistol that deals a bit of damage or the LMG which also deals little damage, but has a huge magazine and therefore makes things a bit easier overall.

Light ammo is not the best type of ammo in my opinion, but there are situations where you can use it instead of the Heavy or Energy ammo types and I don’t think that there’s a better choice than the LMG.

Even though the heavy ammo pistols deal a lot more damage, I would never waste that type of ammo on pistols. The Light Pistol (but especially its advanced or unique variants) is a good choice for lower level enemies or creatures.

You’ll need to mod this one a bit in order to make it a real sniper, but it’s the only regular weapon that fits the bill.

So if you prefer to take out enemies from a long distance (or you want access to some that are more difficult to get to), this should always be in your inventory!

I am not really a big fan of melee combat to be honest and I rarely used any melee weapons, but I really enjoyed the Pulse Hammer.

Deals a ton of damage by default, has Knockout as an effect and is nice and easy to use.

And this would be everything that I had to say about the weapons in The Outer Worlds. Do you agree with my selection of the best weapons, or you have different favorites?