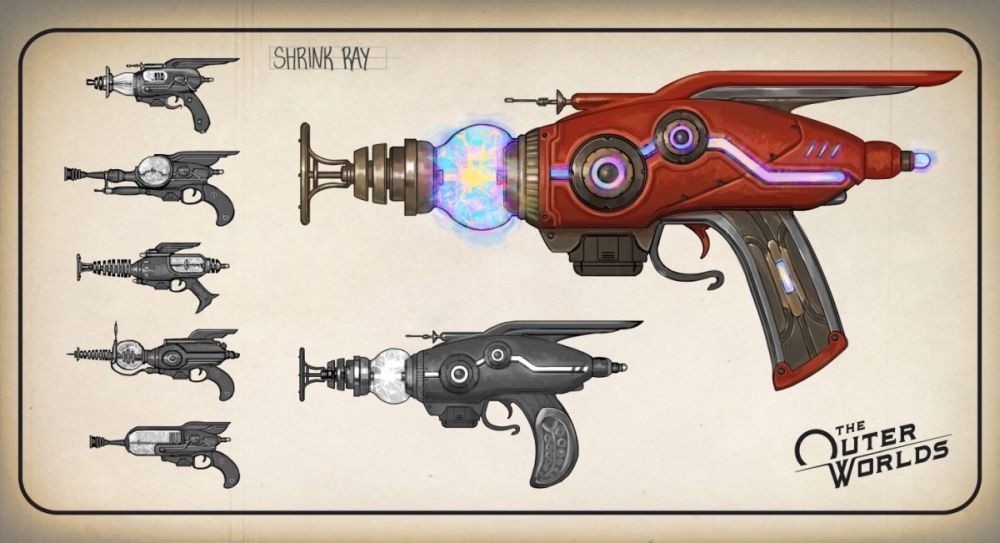 The Shrink Ray is probably the first special Science Weapon that you will find in The Outer Worlds and it’s a pretty spectacular one too… even though not necessarily a perfect one for long term.

In today’s article we will learn everything about the Shrink Ray gun in The Outer Worlds: where to find it, what it’s like and if it’s worth carrying around or not.

The Outer Worlds Shrink Ray: Where to Find It

As soon as you unlock the option to travel to Phineas’ spaceship in the game, you can head over there to pick it up. Or you can wait until you get a quest in the main story line that will force you to go there.

Once on the ship, head all the way to the doctor’s enclosure, and you will see the Shrink Ray on a table to the right:

Simply pick it up and it’s all yours – Phineas Welles won’t mind, on the contrary. He will encourage you to use it.

The Shrink Ray gun in The Outer Worlds is a small pistol using Energy-type ammo in order to shoot its continuous beam that deals little damage (18 base damage):

The interesting thing about it is that it also shrinks the enemy you shoot with it, and does it for a few seconds. Enemies won’t just get hilariously small, but they will also get reduced armor and suffer increased damage.

Note: The text on the weapon itself says: “Shrunk targets suffer from reduced armor and reduced damage” – but I believe that it’s a mistake and targets will actually receive more damage, not less.

Now, while this is something really useful – especially when fighting against bosses and large creatures like the Behemoths or Mantiqueens, the problem is that the weapon itself deals very little damage.

Sure, you have perks and skills to increase the damage caused by Science weapons, but it will still do less damage compared to the larger weapons out there.

One strategy here – but pretty annoying to use – would be to shoot the Shrink Gun first at the enemy, shrink them, quickly switch to a weapon that deals more damage, enter the slow motion thingie and shoot your enemy as much as you can before they regain their original shape.

This won’t give you much time to work with, though so I am not sure that it’s really worth going through the trouble… I tried it both ways: having the Shrink Ray equipped at all times and doing the switching thing and it wasn’t really worth it.

But still, the Shrink Way is definitely a fun weapon to use and nice to have around!

Is the Shrink Ray Worth Having or Not?

As I said, I don’t really think that this gun has more than just entertainment value. There are better weapons out there, suitable for taking out the enemies you’re facing even if they are full size.

But now you know everything about this unique weapon – one that I do believe that you should try out and have fun with every now and then.

Also, have in mind that I have published various other guides for this game (and I will keep doing so): a list of flaws, a guide to companions and much more.