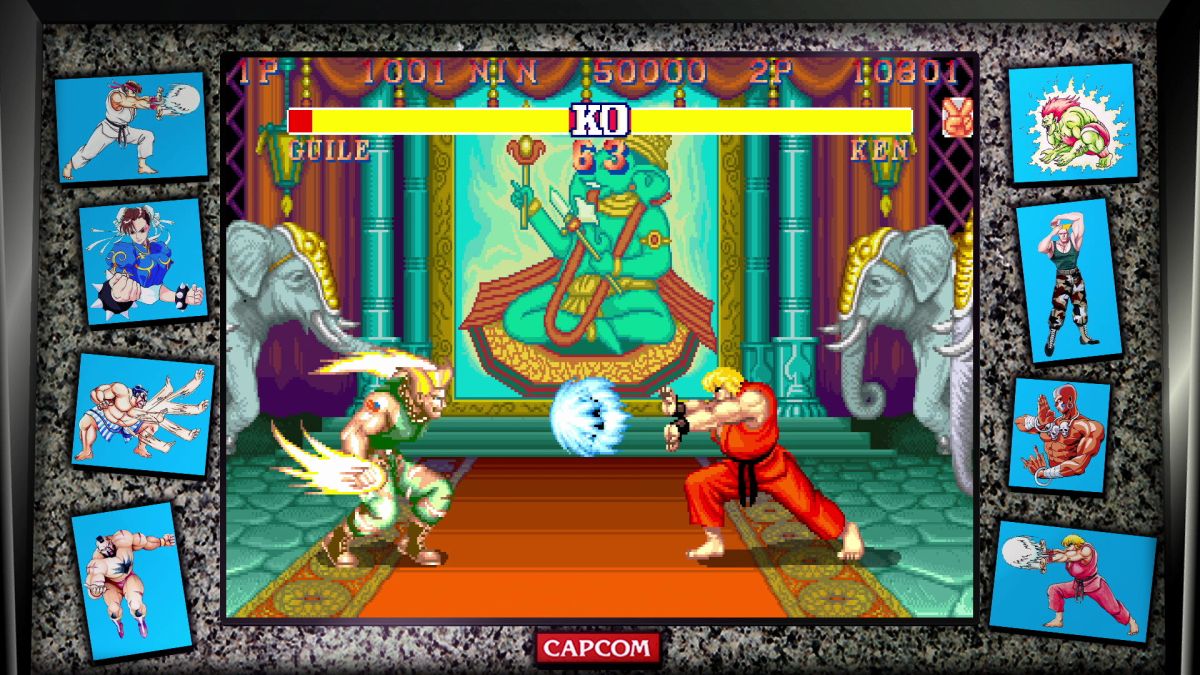 It has been 30 years since Street Fighter’s inception, and the game has debuted about a hundred characters since. So choosing the top 10 Street Fighter characters is a difficult task, especially since everybody has a favorite and they might not be on this list.

Either way, I am trying to list here the most memorable and popular characters in the franchise so at least check them out below.

It was very difficult to pick and rank, but here they are: the 10 best & most popular characters in Street Fighter games!

Almost always dressed in a leotard for some reason, Cammy is the resident attractive girl of Street Fighter.

While her looks alone can enrapture fans’ hearts, she is pretty powerful herself especially in close combat. Cammy heavily relies on her speed to close in on her opponent to deal damage and perform devastating combos that stands toe-to-toe with Akuma’s.

She doesn’t have any long-range attacks though, so she could be a bit challenging to play when facing projectile-equipped characters for new players. But no worries. Intermediate players easily get over this weakness and she’s really not that hard to use after some battles.

Games usually get better with zombies in them, and Street Fighter has just one: Charlie. Well, he’s technically not a zombie. He may have come back to life, but Charlie Nash is no rotting flesh.

He’s basically comprised of stitched parts here and there, so he’s more similar to Frankenstein’s monster. Charlie is Guile’s superior and best friend, with whom he shares a similar moveset.

Unlike Guile though, his attacks are more refined while his playstyle is more on the aggressive side. What’s more, he can also teleport behind or above his opponent to create an opening for surprise attacks.

A staple villain in the series, M. Bison is your typical madman dictator who wants to take over the world, complete with henchmen at his disposal from his crime syndicate group, Shadaloo.

In the game’s lore, he usually lets others do the dirty work for him, but he doesn’t hesitate to dive into action with his strong fighting skills.

M. Bison wields the dark and corrupted energy, Psycho Power, and infuses it into his attacks. His signature move, Psycho Crusher, lets him fly from one side of the map onto the other.

He can also reflect projectiles since Street Fighter V, which can be annoying and frustrating to deal with for new players.

An all-American Air Force major, Guile has a calm and stoic personality that is also reflected on his fighting style. He is a purveyor of justice, and is overprotective of those he cares about, persistently seeking out the enemies that did him wrong.

His signature move, Sonic Boom, can be used to bait the opponent to jump and dodge it, with which he can easily intercept mid-air using his Somersault Kick.

The rich girl of Street Fighter, Karin boasts a self-made fighting style that translates in-game into a variety of strikes, throws and counterattacks.

Her moveset mostly focuses on pacing and aerial and dashing attacks, but its her counterattacks that set her apart from the roster, heavily punishing those who make even the simplest of mistakes.

In between her moves though, she leaves a bit of opening that can be exploited by jump attacks. Still, her mobility and flexibility should more than make up for her short-time vulnerability, making her a favorite among fans.

The personification of evil, Akuma is a recurring antagonist in the franchise, who first debuted in Super Street Fighter II Turbo. He shares some similar moves with Ken and Ryu, and even their ensembles, which is basically just a darker color palette but without the headband.

Like Ryu, Akuma is considered more of an all-rounder but focuses mostly on attacks like Ken. He is very mobile and can dish out a barrage of attacks that can quickly deplete the enemy’s HP.

His defences are quite weak though, so an opening can easily disrupt his moves where the opponent can get the upperhand.

As a consolation, he has a quick teleport skill to reposition himself in battle and a strong projectile attack: the gahadoken.

The main protagonist in Street Fighter III, Alex is a heavy-built character who has a bold and straightforward personality.He uses a mix of wrestling manoeuvre, street brawling and kickboxing for his fighting style.

Despite his build, he is actually quite agile and is able to perform rushing attacks, which makes him deadly as he has a longer-than-normal range thanks to his size.

He is more of an all-rounder though, equipped with rotational and charge moves, so his setups are not much used aside from that they are difficult to perform.

The best friend of Ryu, Ken is the more relaxed yet flashier version of the former. At the start of the game series though, he is practically just a clone of Ryu with a different color palette and longer hair. And they have the same moves and all.

But Ken has evolved since then and now has a different fighting style from his friend and rival, although they still share bits of traits here and there. Ken’s play style revolves around combos and fast attacks, mostly requiring him to engage the opponent in close quarters.

As his range is limited, he can be countered by players who know how to defend against his attacks like all rushdown characters. Still, a masterful Ken player should be able to predict the opponents move clearly to secure a victory.

One of the most prominent female figures not just in Street Fighter but also in general video gaming, Chun-Li is actually the first ever female fighter introduced in the game.

Her signature move, Hundred Rending Legs aka Lightning Kick, easily makes her a fan favorite as it requires no sweat to execute. Which makes newbies want to play as her.

Her quick attacks and aerial assaults though are what the seasoned players consider as her bread-and-butter. She doesn’t deal as much damage hit-per-hit like other heavy characters, but her successive strikes easily makes up for the damage.

No surprise here, folks: Ryu is the poster boy of the Street Fighter franchise, and stating another character otherwise is pure blasphemy.

His simple design (short hair, a ‘sleeveless’ white karate gi, a black belt and a red bandana) makes him one of the easiest to identify in the gaming industry. Ryu’s moveset is actually pretty basic and relatively easy to master, and that’s what made him one of the most picked by players alike.

He is a bit slow, however, and combos aren’t his strong point. Still, his moves are pretty safe and reliable, and a good player can easily dominate others if they know how to anticipate their opponent’s moves.

There you go – my top 10 characters in Street Fighter series. What do you think about the list? Would you rank them differently or maybe add some other characters to the list?

There are some notable characters that didn’t make it onto the list – like E. Honda, Sagat and others… so let us all know your thoughts by sharing them in the comments section below!