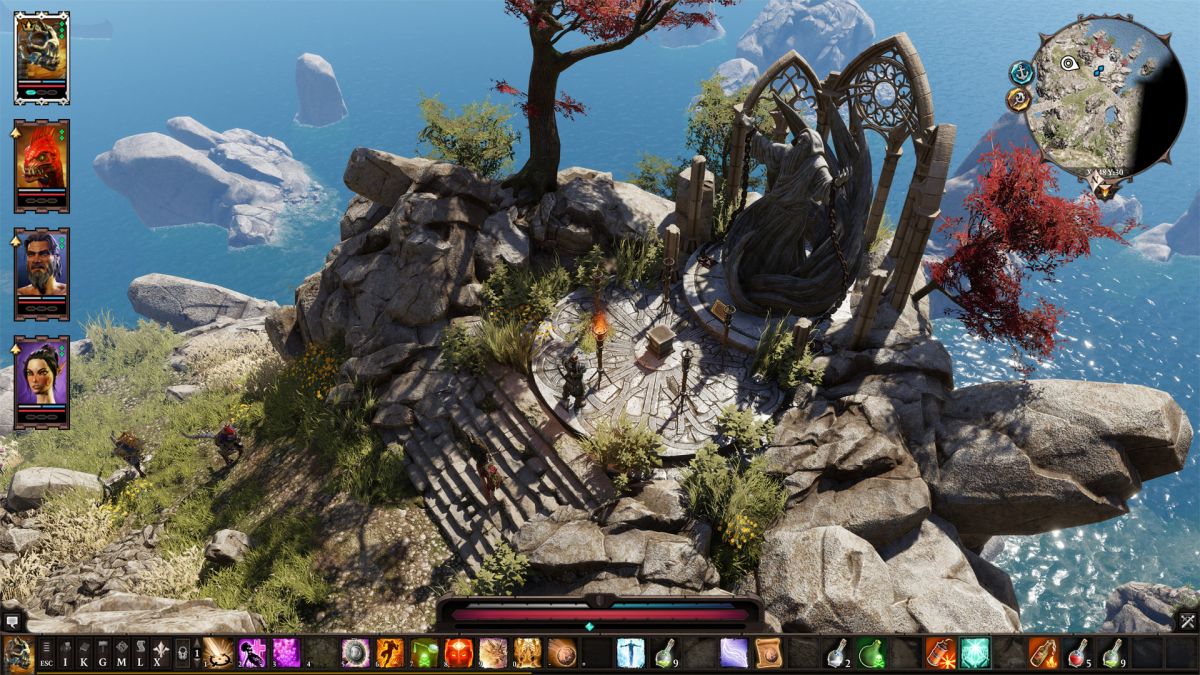 If you’re looking to get some Dungeons & Dragons vibes on your Nintendo Switch, you are in luck: we’ve seen a bunch of amazing D&D games launched for Switch in the past several years and now I am here to recommend the best of the best.

While some of this games have been around for a while, they have generally aged really well and are new(ish) to the Switch console.

The best part is that the controls have been updated and work just great, so you will have a complete and stress-free Dungeons & Dragons experience when you play.

And if you prefer the real deal, make sure you check out our article about the best Dungeons & Dragons dice sets you should own.

But let’s not waste any time and just check out the list of the best D&D games for Switch in 2023.

Notice: We get commissions for purchases made through links in this article. This has no editorial impact over the games presented.

One of the best RPGs of all time in my opinion and the best option you have when it comes to an amazing, complete Dungeons & Dragons experience on your Switch.

This turn based RPG game has been around for a few years already and the first in the series is not available on Switch – but at the same time, you don’t really need to have played it in order to fully enjoy DOS2.

I would go as far as saying that once you start playing this game, you will never feel the need for another!

Few – if any – people recommend this, but probably because it stayed under the radar, unfortunately. But it is the most traditional Dungeons & Dragons game available on Switch that isn’t the one recommended above.

A turn based RPG game with roguelike elements (if characters die, they remain dead) and lots of goodies on the table, despite the cartoonish visuals and apparent casual look. Trust me, it’s nothing but casual and you will find it challenging even on easy.

Like true D&D, this is game that is best played with a friend – it offers both local and online co-op – so it shouldn’t be too much of a hassle to get this done. But definitely give this one a try!

This pack offers the Enhanced Edition of both games, which offers over 200 hours of high quality gameplay. And since these are official Dungeons & Dragons games, set in The Realms, you know you are in for some real treats.

Although these games have been around for a while, they have relatively recently joined the Switch line-up and have aged pretty well. While they won’t look as good as more recent games, the experience itself is top notch and definitely worth trying.

These two games are sold in a bundle, so you will get them both no matter if you want this or not. I would’ve recommended both, so not a big loss.

It’s just that these two are pretty different in approach, with Icewind Dale focusing more on combat and Planescape Torment – on storytelling. But they both work well together and I am sure that any D&D fan will enjoy them both.

I have to admit that unlike the vast majority of players, I enjoyed Icewind Dale more than I did Planescape Torment.

Also, have in mind that these two games were launched in 1999 and 2000 so they will feel a bit dated.

You know that this game is as DnD as it gets since it is considered the spiritual successor of Baldur’s Gate and Icewind Dale. In other words, it plays and feels a lot like those games, so if you enjoy those, you will surely love this one.

An advantage this game has, in my opinion, is that it’s a lot more recent, so you will do get some extra eye candy and nice mechanics too.

Its sequel, Pillars of Eternity II: Deadfire, is only available on PC, PS4 and Xbox One at the moment, after its Switch release was cancelled. But at least we have the original to enjoy.

The game is only available as a digital download.

The Warlock of Firetop Mountain

For those looking for a really good Dungeons & Dragons tabletop game in the vein of the classic D&D Wrath of Ashardalon board game and the likes, The Warlock of Firetop Mountain is the perfect choice.

Its only disadvantage is that it can only be played in solo mode… but with each character offering a different experience and tons of different paths to follow, it’s a really solid tabletop experience for you.

The game is only available as a digital download.

Knights of Pen and Paper 2

This might not look like it when you check out the screenshots, but it is basically a meta D&D game with pixelated graphics and a truly unique style.

Yes, it is a bit childish and goofy and features a gazillion pop references, but it also comes with dynamically generated dungeons and a plethora of heroes to recruit, send to battle and equip with even more items. A true, amazing experience!

Many would put the amazing Neverwinter Nights up there at the top with Baldur’s Gate and the likes, but I personally think that right now it’s place is way lower on the list.

Not because Neverwinter Nights is a bad game or that it doesn’t give you good Dungeons & Dragons vibes on the Switch (or wherever you choose to play it), but because out of the classic games I’ve recommended, it is the one that aged the worst.

If you have played it in the past like I did and amassed hundreds of hours of gameplay, it will be a no-brainer and you’ll enjoy it just as much on Switch as you did on your old PC.

But if you are a new player that never tried it, you might be a bit disappointed as it didn’t age well.

This is a tough recommendation to make, because it is probably the least D&D game on the list – at least in a traditional way. But somehow you still get the Dungeons & Dragons vibe for it. It does feature a lot of dungeon crawling, in the end.

But this one’s not a pure RPG – on the contrary! It’s an adventure-RPG mix in the vein of the classic Quest for Glory games. It’s actually created by the same people, so it makes sense!

But if you want to focus more on the story and storytelling part of the Dungeon & Dragons experience, the part where you solve puzzles and interact with various objects and less on combat (although there’s plenty of that too), this is a definitely a game you should try out.

Another game that gives you D&D vibes, but it’s not really built with Dungeons & Dragons in mind (or at least this is how you feel).

But with its roguelike elements, insane RNG rolls and plethora of characters with flaws and limited lives, this is a great dungeon crawler with a pretty unique approach to the genre.

And, yes, you will surely enjoy playing it if you’re looking for something like D&D on Switch.

We could go as far as saying that basically all RPGs and dungeon crawlers feel more or less like Dungeons & Dragons, but for today’s article I wanted to share the best titles that you can play this year and which were created with D&D in mind (or at least got heavy inspiration from it).

Even though most of these games are older, they are at least somewhat recent releases on Switch so even if you played them already, you can replay them on Nintendo’s console.

But start with those you haven’t played as they are all pretty amazing and I’m sure you will love them.

Are there other Dungeons & Dragons-like games on Switch that should’ve made it on my list? Let us all know by commenting below!