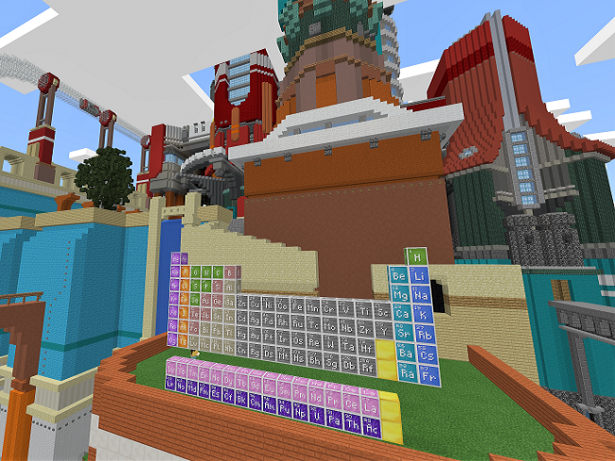 So today we learned that Minecraft has an edition exclusive to schools: the aptly named Minecraft: Education Edition. What we didn’t know is that the Education Edition actually has a lot of really cool features not found in the normal version of Minecraft. One such feature is coming soon in the upcoming Chemistry update.

Minecraft: Education Edition, as the name implies, is the regular Minecraft as we all know and love but without the adventure and monster aspects; the game is essentially lacking danger in favor of a more hands-on creative approach. Think of the Creative Mode of the regular game but with new additions, like tour guides and guided lesson plans aimed at younger audiences, including Math, History, Language Arts, and more.

Now, the amazing world of science is coming to Education Edition. The Chemistry Update will add in new crafting tools that students can utilize to create compounds and awesome new Minecraft items using nothing but the power of science!

The Element Constructor allows students to create elements based on their atomic structure that selects the number of protons, neutrons and electrons. The Compound Creator lets you add elements to a grid which will result in compounds. Compounds can be used in conjunction with other tools to create new items.

The Lab Table is where the magic happens! Taking ingredients from the previous two tools, the Lab Table lets you transform items and also produce new ones. For example, you can turn wool back to its regular white color by using bleach on it, which must be made by combining water and sodium hypochlorite.

The Material Reducer is the key tool in all of this. Placing a block in this will show you an elemental breakdown of the block in question, allowing you to study the world around you and the elements that comprise everything.

There’s a lot to see in this update, and we only wish that the Education Edition features could be accessible in the regular version of Minecraft. We think all this stuff is neat, and we’d love to play around with the new science tools!