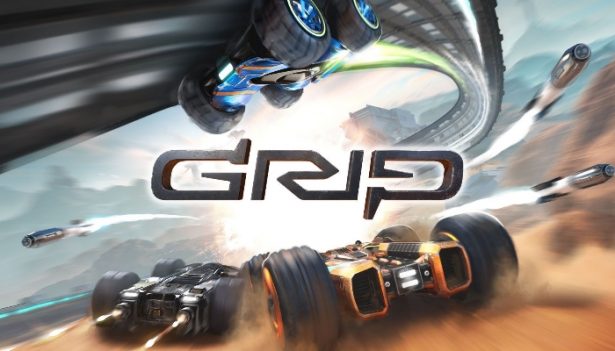 Welcome to the high-octane world of GRIP: Combat Racing! In this thrilling sci-fi racer, you will be barreling down expansive tunnels at blistering speeds, hurling explosive weapons at your foes, and of course blasting through the competition. GRIP seems to have a lot of inspiration from Nintendo’s own long-lost futuristic racer, F-Zero, with a hint of Mario Kart.

Those two games are actually the perfection description of how GRIP plays like – it’s part high-speed racer with gravity defying tracks and part action combat with a plethora of lethal weapons that you can use against the other racers. Needless to say, there’s no shortage of excitement during a typical race in GRIP. 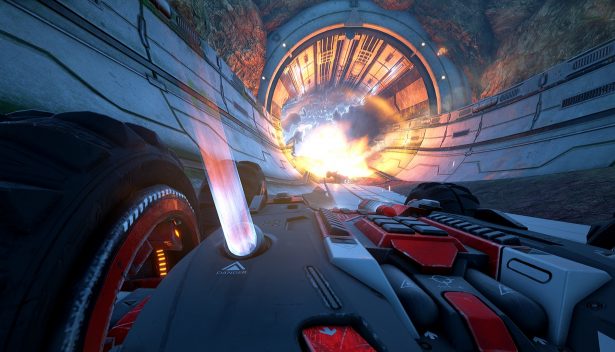 The main mechanic that separates it from the other racing games is its tubular track design. As the game’s name implies, your vehicles are armed with wheels built for hugging surfaces, so you will be driving down tubular tunnels and angled tracks. If you have got the speed, you can actually drive onto walls if the terrain permits it. This provides racers with more room to maneuver and extra paths to discover. Most racing games have you driving down a flat, static track, but in GRIP, you can drive onto the ceiling if you so wish.

Your combat vehicle is equipped with jumping abilities that let you spring into the air. This is useful for getting extra air when going off big ramps, or for when you just want to grip onto another surface. You have also got the standard handbrake for drifting, and even a built-in booster that – while not as powerful as the item booster – can still help you recover from a wipeout.

Speaking of item boosters, a lot of the fun in GRIP comes from taking out your opponents with one of the powerful weapons. Pepper your opponents with the Raptor machine gun and force them to drive off course, or blow ’em up directly with the bombastic Scorpion missile. Or, if you’re feeling particularly devilish, fire off an Assassin, a specialized missile that targets the racer in the lead, much like the Blue Shell from Mario Kart. For extra power, you can charge weapons by sacrificing your other power up, giving some extra strategy to item distribution. 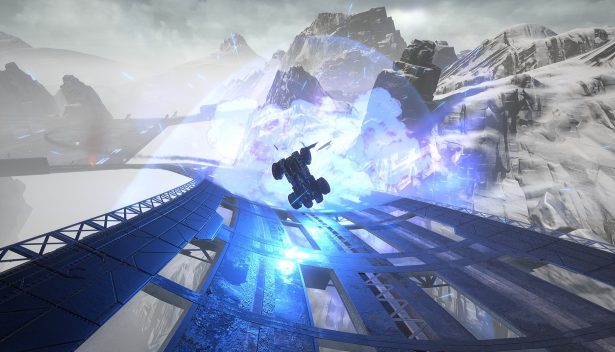 When you combine all of this, GRIP shines at its best. Picture this: you are driving down a long tubular tunnel, when all of a sudden you hear a beeping coming from behind you. A Scorpion missile has locked onto, so you drive onto the walls to spin around at 500+ MPH in an effort to dodge the missile. These daredevil moments will happen to you a lot as you try to stay on course while speeding through hazards and obstacles that not only the other racers throw at you, but the course as well.

For this reason GRIP is best enjoyed with other players. The single player campaign is a fun distraction that will help you get familiar with the tracks and earn experience points, but the real meat of the game is in the competitive multiplayer, whether that be locally with up to four players or online. Taking down racers online is just too satisfying to pass up!

But make sure you are prepared before you challenge the world! Finishing any kind of race will earn you XP, and leveling up unlocks additional vehicles, decals, and wheels for you to customize your rides with. Each new vehicle has its own set of stats, so you will need to find the one that suits you the best. There are no vehicles that feel radically different, so try them all. 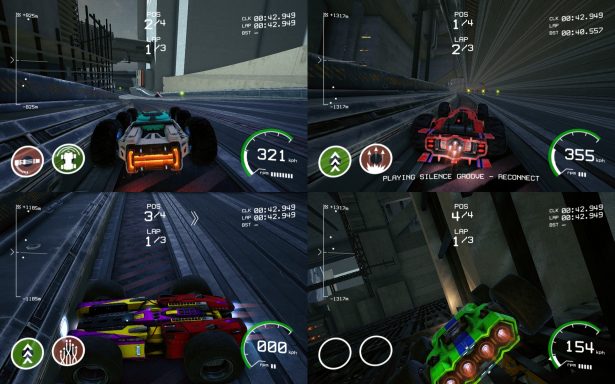 The only problems we had involved occasionally confusing track design, and some technical issues. You will sometimes get lost on your first run through a new track, because sometimes the game does not communicate where you should be going, and it is a bit frustrating to slam into an invisible wall and lose all of your momentum. The game also seems to have some performance issues, as the frame rate can dip every now and then.

Each track takes place on a planet, and the planets all follow unique themes. There’s a snow planet, a desert planet, a forest mountain planet, and so forth. While the tracks look pretty awesome, some general textures seem kind of blurry and the game overall feels like it’s not as crisp and clear as it could be. This is not too big of a problem as you will be blazing by too fast to even notice, but it still drags the game’s overall presentation down a bit.