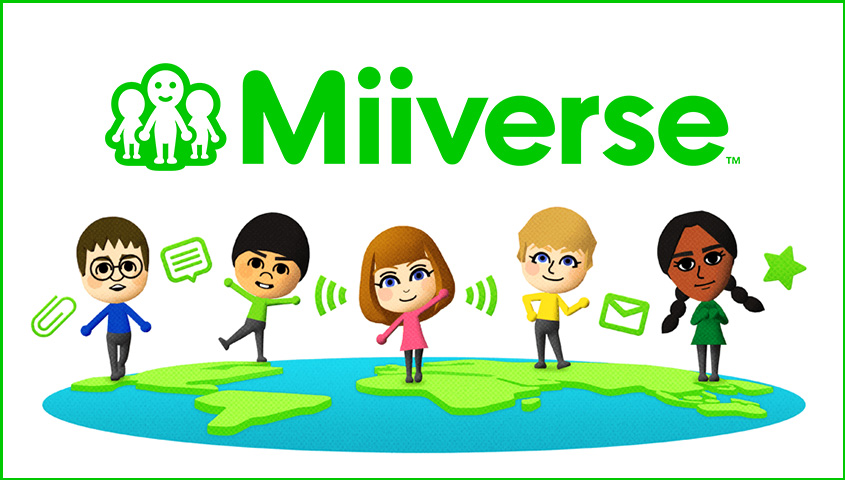 When it was discovered that the Switch had no Miiverse functionality, many were concerned about the future of Nintendo’s own social media network. Sadly the fears have become reality as the official Nintendo website posted news today that Miiverse for the Wii U and 3DS will shut down on November 7, 2017. We expect an official announcement to come from Nintendo of America soon.

Miiverse launched alongside the Wii U’s launch back in the Winter of 2012. While it didn’t seem like much, it was one giant step for Nintendo who had barely acknowledged that people existed on the internet before that. Miiverse served as a sort of social media platform for Nintendo gamers – it was added to the 3DS sometime after. Each game had its own individual community where players could write posts, post screenshots of their adventures, and create polls.

Some games even implemented Miiverse in clever fashions. Walking around in the main hub of Splatoon let you see other players’ drawings and messages, as if they were actually there in plaza with you. Nintendo Land did the same thing where players could talk about their favorite attractions. Super Mario Maker let players comment on specific points of custom levels. The Miiverse stage in Super Smash Bros. for Wii U/3DS would display messages related to the fighter who was in the lead.

Some saw it as a novelty, while for others it was the main way to connect with other Nintendo gamers. It was simple, easy to use and of course featured that unique Nintendo charm. While this is sad news indeed, there’s still some hope. In Splatoon 2, there’s a built-in feature that allows you to draw pictures and send messages just like the Miiverse feature in the original Splatoon. We hope more games utilize something like this in the future.

The main reason for this seems to be Nintendo wanting to push user created content on more mainstream social media platforms, like Facebook and Twitter. Considering the Switch has native support for posting screenshots and the like to those platforms, this seems likely.

It’s been a good run, Miiverse!