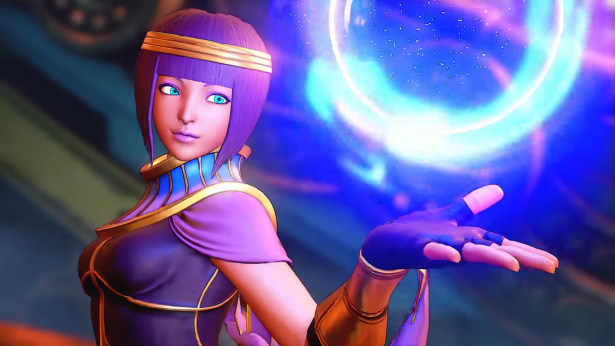 Menat is a young, mysterious fortune teller who once appeared in Ed’s dreams. She is heavily implied to be Rose’s apprentice, and has thus decided to carry on her legacy of traveling and the world and sharing her prophecies. She hails from Egypt, and you can really see the Egyptian priestess in her aesthetic design.

The designers seem to be going for the “simple to pick up but hard to master” approach when they designed Menat. She has relatively low health and a low stun threshold, and only has a couple of special moves focused on manipulating her crystal ball and her Soul Reflect.

Menat’s unique fighting style is centered around her crystal ball which she can freely throw out and recall. Attacking in conjunction with your crystal ball and lead to some very tricky situations for your opponent. Catching your foe at unsuspecting angles and mastering the crystal ball will be key to victory with Menat! Activating her V-Trigger will cause her crystal ball to split into six, allowing you to barrage your opponent for the ultimate offense!

It seems Menat has also learned a few tricks from Rose. Menat’s V-Skill allows her to perform the aforementioned Soul Reflect, which lets her absorb or reflect projectiles. She can even use it at point-blank range for a bit of damage. She also appears to have some sort of anti-air in which she leaps into the air to catch mid-air opponents. She then throws them away and ends the moves with a cute pose! It’s very similar to Rose’s Soul Throw, one of her signature moves.

Check out the official Capcom trailer above, then you can head on over to EventHubs’s Menat page to see a command list that details her moves.