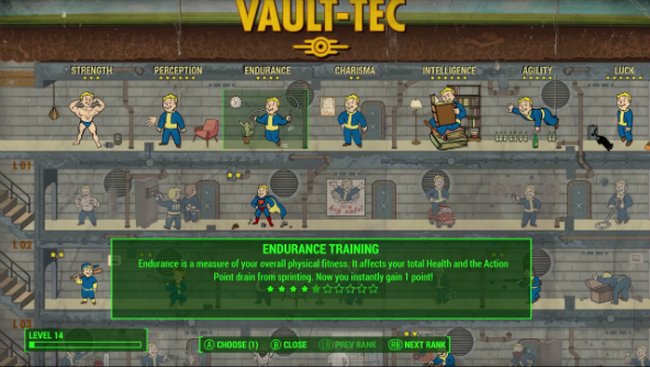 If you want to start planning your character build in Falllout 4 and know exactly what to go for when the game is launched on November 10, you can easily do so.

We already have nice Character Building tool at Vault 111 (although that’s based mostly on speculations), but if you really want to know what to expect, you have to know all your Perks that can be unlocked based on your SPECIAL stats.

There’s quite a few of them, but fortunately we’ve got you covered.

What we have below are lists of all the perks in Fallout 4, grouped based on the SPECIAL stat required for unlocking them – as well as their description and effects they have on your character.

It’s really complex and helps you decide early on for the direction of your character. These are all based on screenshots from the current storm of leaked footage, so there are spoilers ahead, which means that if you want the complete experience when the game launches, you might want to skip them.

But if you want to plan ahead, check them out below:

So we’re talking here about an impressive 70 perks that can be unlocked and upgraded. Of course, during a game, you won’t be able to unlock them all, not even upgrade most of them, so you need to plan ahead.

The perks you can get are also based on the SPECIAL stats that you have, so a bit of planning doesn’t hurt.

But since there is still one week left before the game fully launches, I think it’s really safe to say that you have all the time in the world to plan your character’s build carefully!