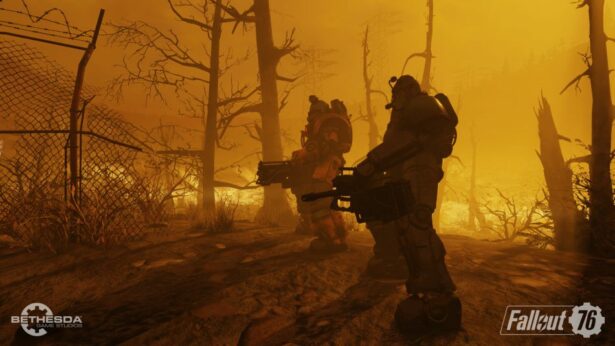 Back when I went through that horrible bug that saw me lose my camp in the game, I also became wanted in Fallout 76.

So, I was finally faced with a problem that I had never had: how to get rid of my Wanted level in Fallout 76?

Now, I’m not the type of player who’s that much into PvP in Fallout 76 and it was, of course, a mistake: I got a 10 Caps bounty on my head for apparently damaging another hero’s base.

It all happened due to a bug of sorts (or so I believe): there was a mutant hound attacking that base and all I did was try to help.

I pulled my shotgun and started shooting, but apparently my aim was crap because I ended up damaging the property as well.

I instantly got a Wanted level and 10 caps on my head. Something that I really felt ashamed of. So I wanted to remove my wanted level as fast as possible.

Apparently though that is not possible in the game without you dying – although some claim otherwise.

This is, for the most part, a good thing as it discourages violent behavior and helps us avoid the game becoming toxic. But for those like me, it’s a real pain in the Pipboy!

But… is there really no way to get rid of your Wanted level in Fallout 76? Here is how you will become wanted:

Any action that you perform to harm another player or their property will result in you getting a bounty on your head.

You start with a bounty of 10 caps on your head and this will get higher and higher as you do more evil stuff.

Of course, the higher the reward, the more people will come hunting for you. So that’s why it might be best to go from bad to worse if you’re already getting a wanted sign.

Because you can’t get rid of your wanted status in Fallout 76!

I’ve heard some players claiming that they lost their Wanted status in the game after a bit over 60 minutes of not doing anything bad (it was a 10 caps bounty like mine), but in my case that didn’t happen.

Now, I am not 100% sure that 1 hour passed since my wanted level appeared, but I believe it did and nothing changed in regards to my status.

I even tried to log off the sever and log back in, quit the game and restart it – nothing matters. Your Wanted level stays there and follows you to eternity.

And that’s a bad thing, especially if you are a peaceful player like I am. I like to interact with others, but when you are Wanted, you are no longer shown the position of other players on the map (since otherwise you might notice who’s coming to hunt you down).

And if you are a higher level player with a low bounty – again, like I was, nobody’s going to risk attacking you.

And since you will only lose your Wanted level if you die… that means that you should start doing more evil stuff. Increase your wanted level to increase the rewards others get when killing you… and start over fresh and be more careful.

And have in mind that when you are wanted and killed by another player (or whenever you die in the game, actually) you will lose all the junk you are carrying.

If you want to prevent your character from accidentally damaging property or shooting other players – like it happened in my case – you should activate the Pacifist mode in Fallout 76 from the settings.

This will not let you attack other players (although they can attack you if they want).

This kind of sucks, in the end… but since most people won’t get a Wanted level by mistake like I did and most get it from being the outlaws and attacking other players, it might be a good thing to have a permanent marker that teaches you a lesson.

What do you think though? Should you be able to lose your Wanted level, maybe when the ransom’s low – meaning that you are not that evil, in the end? Or is a permanent Wanted level a better option?

3 thoughts on “Fallout 76: How to Remove Your Wanted Level”