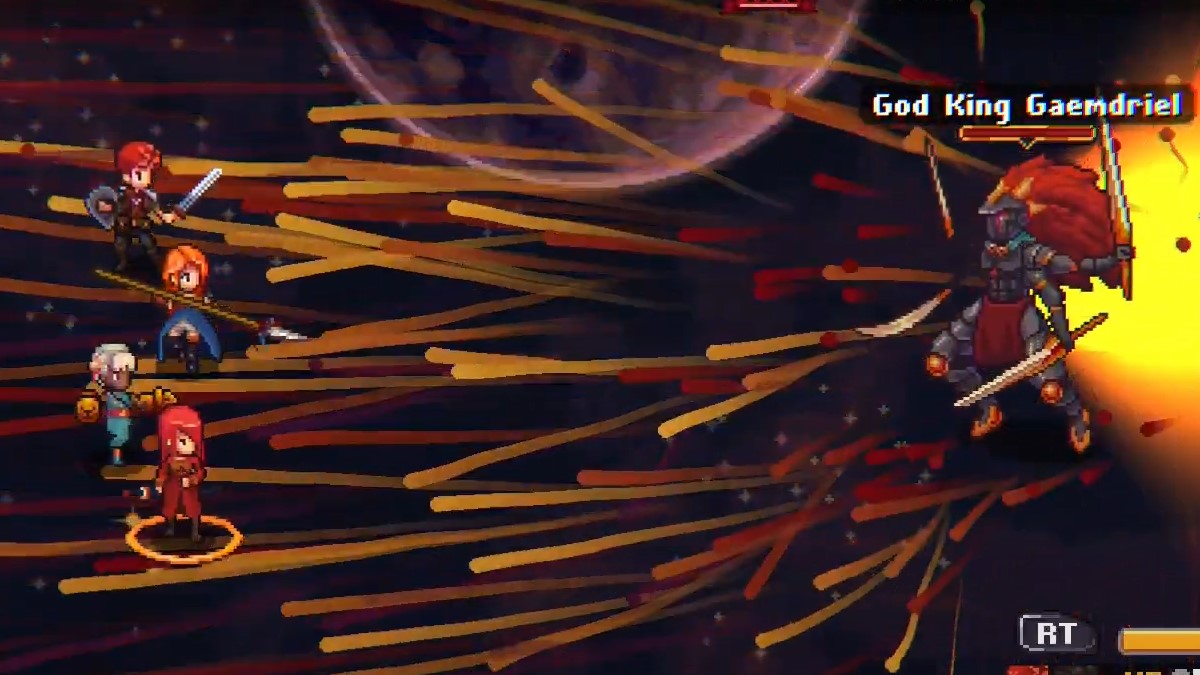 Collecting the elemental tablets is an end-game activity in Chained Echoes that allows you to fight the hardest boss in the game.

There are six tablets in the game, scattered around the map. If you want to fight God King Gaemdriel, you’ll need to collect all of them.

Before setting off on the adventure to fight this boss, consider equipping your characters with the best possible gear by getting ultimate weapons, armor, and sky armor.

In this guide, I will explain how to find all elemental tablets in Chained Echoes and showcase where to use them to summon God King Gaemdriel.

The water tablet can be found in the Narslene Sewers. Before being able to get it, the players will need to have the following items.

With these items, enter Raminas Tower and use the elevator key on the elevator on the third floor to go down to the first floor. Move forward until you find a boat and use Charon’s Coin Bag there, and you’ll eventually reach Narslene Sewers.

Defeat the boss Boutrous and you’ll find the Water Tablet there.

While searching for the Water Tablet, right after traveling with the boat, you’ll be on Baalrut Tunnel.

Head towards the top-right side to fight two bosses: Chel and Twi’Tone. After defeating them, you’ll find the place with the Fire Tablet.

After taking the boat in Ograne Grottos, head south, jump down over the ledges and head down the ladder until you find a portal to a different dimension.

Head in there, defeat the boss Randomage, and you’ll find the Earth Tablet there.

After completing the main story, travel to the northeast of Valandis. A new location will be available with rafts and tentacles.

Travel there, defeat the boss Krakun and you’ll find the Wind Tablet in a chest behind it.

Before trying to get the Light Tablet, you will need to get the Baibai X key by progressing through the sidequest ‘A Goblin’s Dilemma’.

After getting the key, travel to the northeast edge of Perpetua and use the key to destroy the vines blocking your way.

Fight the Assassin Girl boss there and you’ll obtain the Light Tablet.

For this tablet, you’ll need to complete the previously mentioned sidequest ‘A Goblin’s Dilemma’.

During the final part, you’ll find an elevator at the north side of Wygrand Mines that can be unlocked with the Miner’s key (obtained earlier during the quest).

And that’s all. As for where to place the elemental tablets, travel to the altar on the west side of Ograne Grottos and place them there. Enter the newly-created portal and get ready to fight God King Gaemdriel.

To sum up, that’s everything you need to know on how to get the six elemental tablets and find God King Gaemdriel in Chained Echoes.

With this activity completed, you’ve probably finished everything there is to be done in the game. In this case, consider checking out our list of the top 5 games similar to Chained Echoes.

Which tablet troubled you the most? Do you have any tips for defeating God King Gaemdriel? Let us know in the comments below.