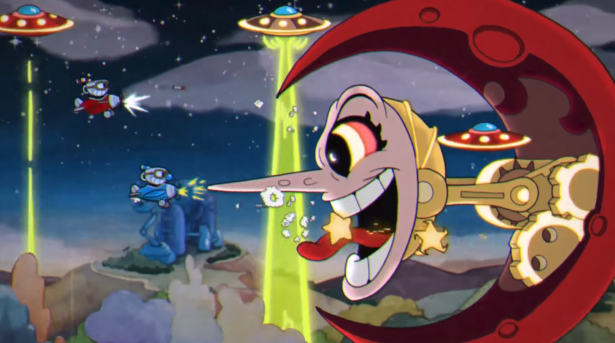 Cuphead, developed by Studio MDHR for Xbox One and PC, has officially launched today! Cuphead is a run-and-gun game like Metal Slug or Contra but with a super slick and unique art style. Just take a gander at the trailer below and you’ll see what we mean!

Cuphead, along with his brother Mugman, are two simple fellow cup… persons? They live in the magical Inkwell Isles, but one day they come across a strange casino and somehow end up in a gamble with the Devil himself. Cuphead gets a shot of courage and bets his and Mugman’s souls for all of the Devil’s treasure but unfortunately, as one would expect when it comes to going against the Devil, Cuphead loses the bet. The Devil forces them to seek out the Soul Contracts, contracts of other characters who have also lost to the Devil, in order for them to keep their souls.

While the plot is strangely dark and twisted, the game itself is anything but! Cuphead sports a hand-drawn old cartoon art style heavily influenced by the works of Max and Dave Fleischer, of Betty Boop and Popeye fame, among others. The game was originally announced way back in 2014, but a lot of love went into the game with careful consideration, and now it’s finally here to play!

Be careful though! Don’t let the chipper art fool you – Cuphead is one serious game. Earlier this month it caused quite the stir-up in the gaming journalism community when one such game journalist had a very difficult time with the demo of the game. The game is pretty challenging though, and its design calls back to old classics like the aforementioned Metal Slug. Be prepared for a challenge!

You can buy Cuphead on Steam or the Windows Store.