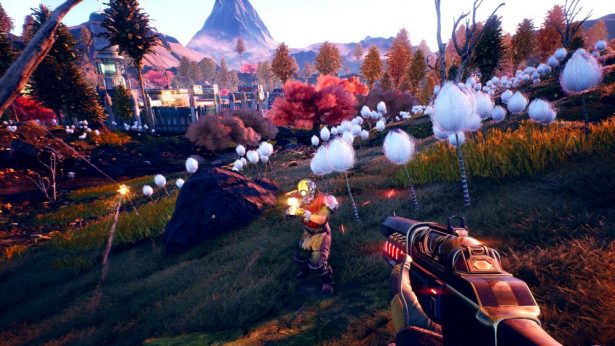 The Outer Worlds is an upcoming RPG from Obsidian, the developers of many amazing games including Fallout: New Vegas. And you won’t find it strange that I mention Fallout here, because The Outer Worlds looks just like ca sci-fi Fallout game set in space. And that’s an awesome thing!

I am a huge fan of the Fallout franchise and even though my love for Fallout: New Vegas was not as big as others’ I still enjoyed playing it and spent tens of hours exploring every nook and cranny. Now, Fallout 76 is out and even though I was pretty much hyped after playing the demo, I’m ready to call Fallout 76 a failed experiment.

And then I get to see the trailer for The Outer Worlds, which had me smiling. That’s the Fallout game I want! Check it out below:

If you’re a Fallout fan, you probably have to close your mouth now. Even if you’re not, the trailer is impressive. It’s hilarious, it shows an amazing new world and offers the promise for something truly spectacular.

And yes, it does make you think about Fallout, with the costumes and weapons and general art. It’s Fallout set in space and it’s absolutely amazing.

I like my RPGs to be old(er) school: to come with a rich story line, to have millions of quests and especially a vibrant life. I know the Wasteland or Appalachia as they call it nowadays has the correct excuse to only be populated by robots and monsters, but that kills the game. Destroys it and makes it less fun than ever.

I want to complete quests, I want to join up with factions and fight other factions, I want to explore the map and follow a story, I want to meet colorful characters with zany personalities… I want everything that Fallout 3, New Vegas and Fallout 4 delivered… and it seems that I’m going to get even more than that from The Outer Worlds.

Add to that the fact that it’s a game developed by Obsidian (who, apart from New Vegas also delivered other amazing games like Pillars of Eternity, KOTOR 2, Tyranny and the strangely spectacular South Park: The Stick of Truth). If there’s one thing that you should highlight about them is that they know how to do RPGs.

And the trailer for The Outer Worlds is INSANE. I got hooked instantly and I loved it even though it doesn’t really show much gameplay or delivers a ton of information. I’d still pre-order the game right now and I’m sure it will be great. Finally, I’m getting a new Fallout to love, even if it’s with a different name, most likely has nothing like VATS and is set in space. It’s the vibe that matters, and The Outer Worlds has it all!

There are no details regarding the release date of The Outer Worlds, but you can already wishlist it on Steam, where we’re told that it’s coming in 2019. And judging from the trailer itself, we could say that development seems to be in a very advanced state, so I wouldn’t be surprised if we got this game sometime in Spring 2019. Fingers crossed!