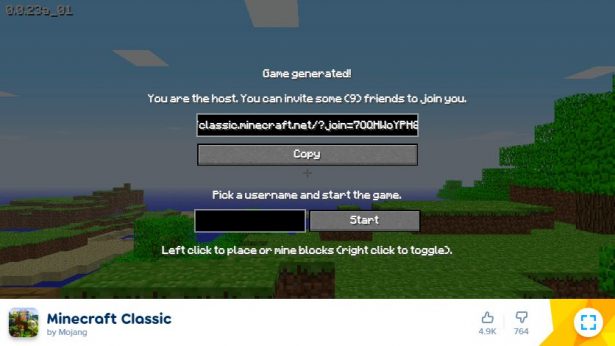 Here’s what was happening in the gaming landscape in 2009. Shoot-and-loot game Borderlands made its debut on PS3, Xbox 360, and PC. Over-the-top action spectacle Bayonetta spun up a storm, and the excellent Uncharted 2: Among Thieves saw Nathan Drake hanging from trains and travelling through snowy mountain villages on his quest for treasure.

A little game called Demon’s Souls unknowingly started one of the most successful cult franchises of all time, and the Guitar Hero franchise began its unwitting decline with its slightly less great fifth instalment.

Amid all this, a little game called Minecraft was quietly released to the public. In May that year, indie form TIGSource saw Markus “Notch” Persson upload a developmental version of his game.

It was strongly influenced by games like Zachtronics’ Infiniminer, which also had a first-person perspective and revolved heavily around manipulating blocky environments.

Unlike Infiniminer, however, Notch openly admitted Minecraft wasn’t yet finished. It needed work, and it needed time, but it would eventually grow into a world-beating monster.

We’re ten years away from that historical moment, and Minecraft is celebrating its tenth anniversary in 2019. Hard to believe it’s been around for ten years, since many of us here remember the exact moment we first heard about it, but the numbers don’t lie.

Because they’re such lovely fellows, Mojang (the company Notch set up to deal with everything Minecraft-related) and their owners Microsoft have made Minecraft Classic available in your browser on Poki.com. This is the 2009 version as Notch intended, with everything very much intact from that year.

As Microsoft and Mojang themselves have stated, that means Minecraft Classic is showing its age right out of the gate. The effortlessly intuitive and lovely user interface of modern Minecraft is nowhere to be seen here.

Instead, we’re stuck with the functional yet unassuming UI the 2009 version sported. Similarly, we’ve got 32 blocks to build our dreams with, and if we want to choose other blocks instead then we can go play a different game. Minecraft Classic isn’t ashamed of who and what it is, and it hopes you can accept it for its real self.

This deal is immeasurably sweetened by the fact that Minecraft Classic is completely free. It’s hard to know where else you could get this level of enjoyment without paying a single penny for it. The blocky landscapes, endless azure oceans, and incredible level of depth hidden under a layer of blasé superficiality are all still here in Minecraft Classic.

Minecraft Classic is unashamedly broken, though. Punching trees to death with your bare hands usually results in a sequence of weird abstract blocks simply floating in the air, untethered to your petty human laws of gravity.

Objects you place will sometimes disappear apropos of nothing, so it’s not clear whether you’ll be building anything lasting or whether it will all vanish as if in a dream.

There’s a weird sense of homegrown oddness to Minecraft Classic that definitely feels at odds with the very smooth, very polished entity we can play on our consoles and PCs today.

That’s no bad thing, though. Minecraft Classic feels like the labor of love it very much was. This is Minecraft as indie project, Minecraft as “I’ll just work on this for a few minutes after my day job”.

Playing it might not feel as fulfilling or as complete as modern Minecraft does, but it was never meant to. This isn’t a version of the game that Mojang and Microsoft are presenting as “the one to buy”.

Instead, it’s a curio, a way to experience the game in its basest possible form. It’s like watching how the bread in your sandwich was made.

There are, of course, still options here. You can randomly generate a world simply by accessing the menu, and there are three different sizes for you to choose from. You can impose fog on the world, which adds an arty filter to things and makes everything harder to see.

You can even invite some friends to come play in your Minecraft Classic world simply by sending them a link (how very 2009, eh?). Minecraft Classic may not be as fully-featured as its grown-up cousin, but it brings its own activities to the table and manages to make them enjoyable.

If you still haven’t checked out Minecraft Classic, you owe it to yourself to do so. It’ll take barely any of your time (unless it sinks its hooks into you like it did for us), and it’s worth experiencing for the sheer graft it must have taken to get this project off the ground. Minecraft Classic is a relic, but it’s one that still shimmers in the light.