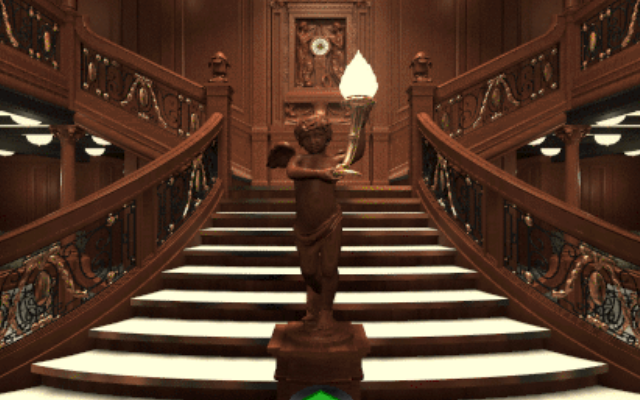 Did you know that about a year before the movie blockbuster Titanic astonished audiences around the world, there was a game based on the same, now famous British passenger liner? Yup, we didn’t know either, but we’re glad we found out because we love learning about obscure adventure games like this!

The game in question is none other than Titanic: Adventure Out of Time. The mid 90’s was a rather strange time for gaming, as the push for maximum graphical fidelity began, and we all know where that led – the dark age of live-action full-motion video games! Infamous games like Night Trap employed the use of live actors to make games more realistic, but it often failed and made the game feel less serious than intended. Though, there were games that pulled it off pretty well, and Titanic: Adventure Out of Time was one of them.

Now, if you’re only familiar with the James Cameron film, prepare to be surprised! In Adventure Out of Time, you play as Frank Carlson, a former British secret agent. After failing a top secret mission aboard the RMS Titanic, he tries to live out an ordinary life… only to be caught in the middle of the 1942 London Blitz. After blacking out from an air raid, he wakes up and finds himself aboard the Titanic. Having seemingly gone back in time, Carlson sets out to change history by making sure the mission is success this time.

And what a mission it is – Carlson is tasked with stopping not ONE, not TWO, but THREE major historical events. Guess what those are? World War I, World War II, and the Russian Revolution, of course! We weren’t kidding when we said it was quite the mission! In order to do this, the game played out like a classic first-person point’n’click adventure game ala Myst. Carlson must find clues and key passengers to piece together what exactly went wrong the first time this mission happened. The game was praised for its openness, as there were multiple endings depending on how many mysteries you were able to solve.

If any of the above has piqued your interest, the game has been released on GOG where it’s been outfitted with full modern PC support, and all of the usual GOG goodies. Give it a shot if you like classic 90’s adventure games!