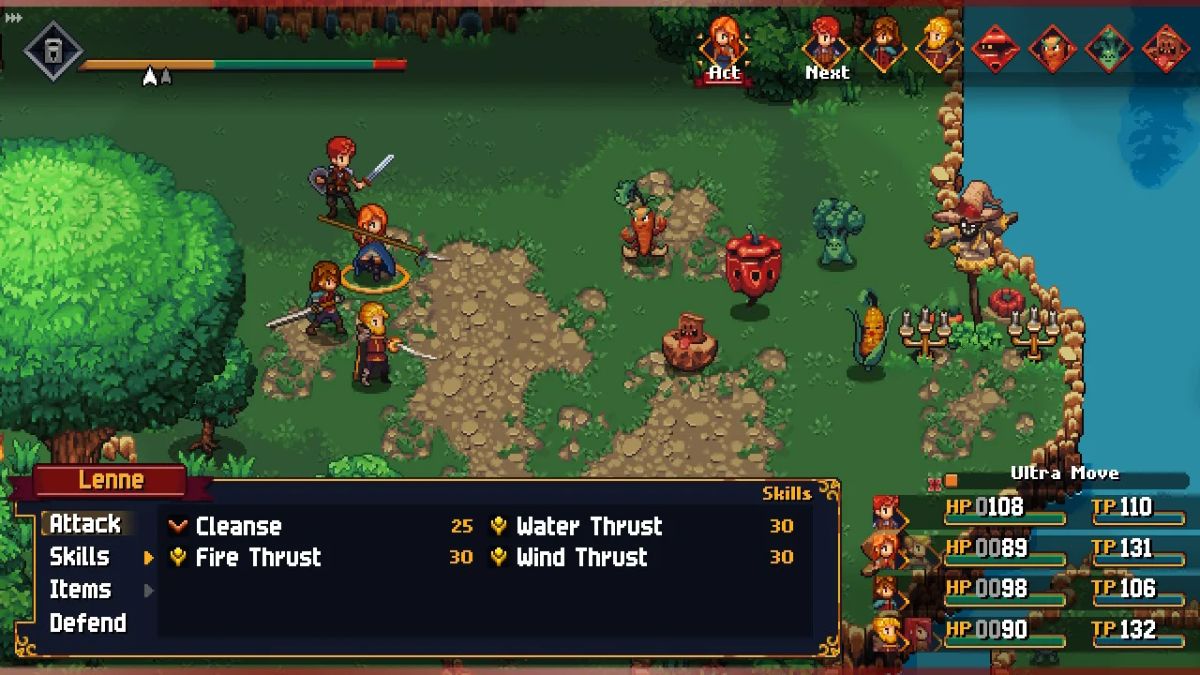 Lenne is one of the best DPS characters in Chained Echoes due to her insanely high elemental damage.

She can utilize various elements to take advantage of enemies’ weaknesses while also having the ability to cleanse debuffs.

For an idea of how to build your team, consider checking out our in-depth list of all characters available in the game.

In this guide, I will showcase the best build for Lenne in Chained Echoes based on her role, stats, skills, and gear.

Lenne’s role is fairly straightforward: she is a DPS unit that focuses primarily on elemental damage. While her weapon of choice is a spear, its damage is based on the magic attribute.

In addition, Lenne can also be played as an elemental physical attacker with her spear. If built properly, and players utilize the best abilities for this build, Lenne can become a solid melee unit.

Nevertheless, her ideal role is that of a classic mage where she deals massive magic damage from range.

Also, she can set up an amazing combo with Glenn. Start with Glenn’s Oil Slash and follow up with any of Lenne’s Fire Attack for insane damage.

Lastly, she has the key ability to cleanse debuffs, which makes her a must-have in almost every fight.

Lenne’s skills combine support utility and elemental damage. The best part is that she can utilize various elements to ensure she can always take advantage of the enemies’ weaknesses.

Specifically, here are the best skills for Lenne in the game.

With wind, water, and fire attacks, Lenne has an answer for most situations and will help you take down some of the hardest bosses in the game.

In terms of the best gear for Lenne in the game, things are fairly simple.

For the early game, focus on anything that increases Magic, which will buff Lenne’s damage significantly. Then, opt for a combination between Agility, Mind, TP, and HP based on what you need more.

Later down the line, your goal is to upgrade your weapon, armor, and sky armor to ultimate rarity. Keep in mind that this is an end-game activity and before that, you should use the best gear that you currently have.

As for class emblem, the Pyromancer Emblem is the best option as Lenne focuses on fire damage

How to Get the Pyromancer Emblem

The Pyromancer Class emblem can be gained by completing the Leonar Temple area.

Keep in mind that to get this emblem, players will need to have Sacred Water on them.

To sum up, that’s everything you need to know about the best build for Lenne in Chained Echoes.

As one of the best DPS units, with the right team synergy, Lenne can reach exceptionally high damage numbers, especially if the opponent is weak to fire, wind, or water.

If you enjoyed reading this article, consider checking out our guide on the best build for Victor in the game.

What’s the highest damage you’ve managed to deal with Lenne? Do you have any specific combos to recommend? Let us know in the comments below.