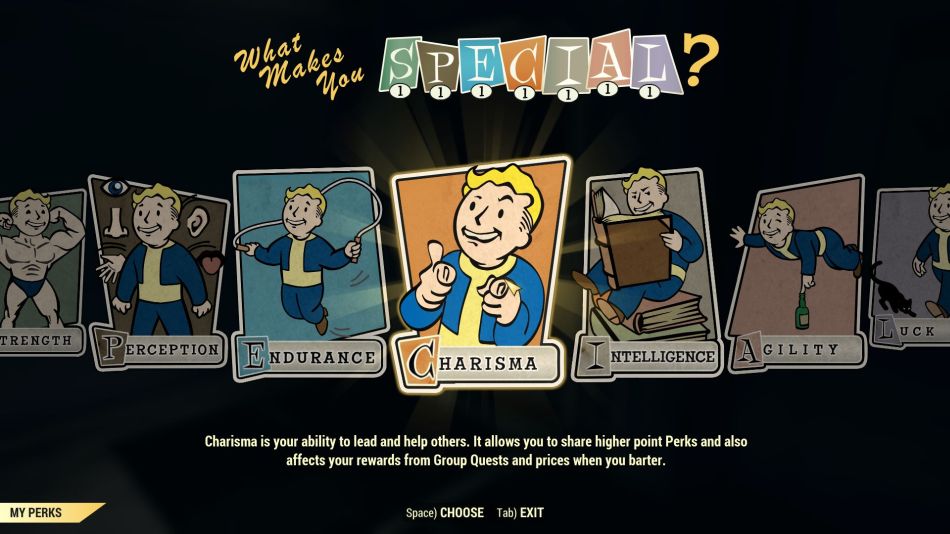 Fallout 76 follows a character development system similar to that in the previous games in the series. Today, we’ll learn how to build your character in Fallout 76 and what SPECIALs to choose to get the most out of him or her.

These main attributes, known as the Fallout 76 SPECIAL attributes, are free to choose and upgrade in any particular way you see fit. If you want to build a brute that’s nothing but Strength – you can do it.

But it probably won’t be the best idea ever – although it could be fun!

Either way, in today’s article we’re going to talk about the Fallout 76 SPECIAL system in our guide and hopefully help you better understand how to develop your character in order to get the most out of it.

Please have in mind that this is not a guide offering character builds in the game, but more generic knowledge and an overview of the specials.

What are the SPECIAL attributes in Fallout 76?

Each of the letter creating the word “Special” stands for one of the seven major attributes in a game, attributes that your character can unlock, with different effects:

Perception: Increases awareness, showing you enemies and nearby players on the minimap faster. It also influences your aiming in VATS.

Endurance: Increases your health, the ability to run for longer amounts of time and also increases your resistance to disease.

Charisma: This is mostly aimed at the multiplayer part of the game, allowing you to share your Perk card benefits with your teammates, but also increases the rewards you get from the limited group events that take place in the game world.

Intelligence: This lets you hack computer terminals in the game and reduces lock-out time, but also increases the quality and durability of items that you craft, as well as the amount of materials obtained from scrapping junk.

Agility: Increases your chances to sneak (staying hidden when crouching, for example), as well as the amount of AP you have.

Luck: Increases your overall luck in the game, meaning that you find more loot in containers and of better quality. It also increases the recharge rate of the Critical Hit rate within VATS.

You start the game with 1 point in each attribute and you earn 1 additional point every time you level up in the game.

This point can be assigned as you see fit, but make sure that the choice you make is the one you really want because you can’t change it later on!

Are there any limits to the SPECIAL points in Fallout 76?

At the moment, you can’t increase any Special attribute to a level higher than 15 and the total number of SPECIAL points that you can earn in the game is 50.

This means that you can’t max them all out, so a bit of planning is required.

Apart from the direct effects that your SPECIALS have on your character, as mentioned above, they also influence the number and quality of Perk cards that you can equip.

I’ll have a guide for the Perk cards published soon, but until then we can say that these are some of the most important things in the game when it comes to developing your character.

You get Perk cards when you level up and there are also packs that are offered on various occasions in the game. The perks you get can be equipped in order to offer various bonuses to your character.

However, in order to equip a Perk, you need to have enough Special points to do so.

For example, if your Strength is 2 and you have 2 perk cards related to the Strenght Special: one costing 1 point and one costing 2, you can only equip one because otherwise the total value of the Perk cards would exceed your current level.

Perk cards are varied in the game and they can be leveled up as well in order to increase their boosts, but they will always be related to the bonuses offered by the SPECIAL attributes.

This makes planning your character build a bit easier, even if you don’t have a list of all the Perk cards in the game.

What SPECIALs to focus on in Fallout 76?

However, if you don’t really know what to invest in early on, I would say that you can’t go wrong if you focus on Strength: you get to carry more and you’re a beast in melee combat, which is something you’ll probably do more often than you’d like to.

Then, I would say to focus overall on the attributes that directly influence your game and play style.

Endurance is also good to have, just as it is the case of Luck. Intelligence is good if you plan to do a lot of hacking, but I don’t think it should be maxed out.

Charisma is only good if you’re planning to focus a lot on the multiplayer aspect of the game. If you’re not constantly in a team and you don’t anticipate that changing soon, you shouldn’t really focus on this SPECIAL.

Finally, I would say that I consider Agility and Perception pretty much useless as SPECIALs because their benefits are not that good. It’s true that the perk cards for Perception especially are good as they affect most weapons… but in the end, you have to choose some and ignore others.

If you’re a veteran Fallout player, you probably know already how to build up your character.

The main difference is that Charisma has changed a lot compared to the single player Fallout games, but everything else is mostly the same. So building up a character shouldn’t be too different to what you’re used to.

Based on my own experience, I would say that stealth is not really the best approach in the game and that it’s always a good idea to invest in Strength – especially early on, you will have to do a lot of melee fighting and building a sturdy, durable character is preferred.

But that’s my opinion, others might be stealth masters sneaking around my brute without me even knowing…

The Perk cards are a bit more important than the Specials themselves and you should always invest your attribute points to accommodate the cards that you want to equip.