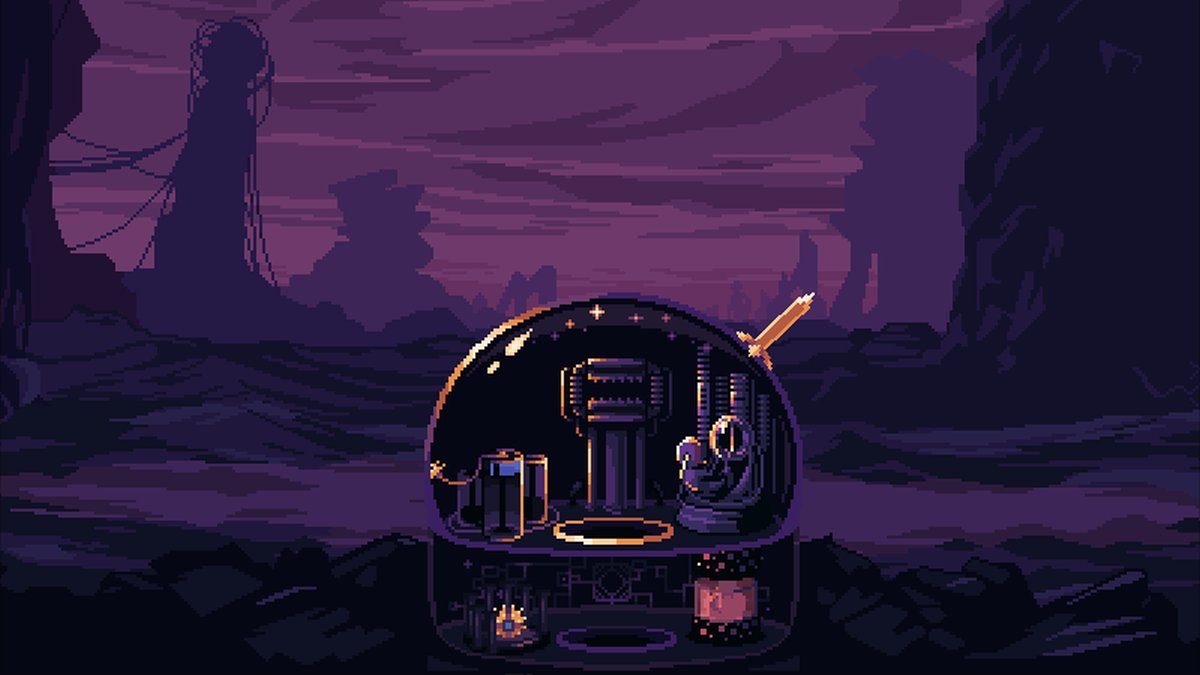 How should you approach the Sword Dome in Dome Keeper to ultimately attain victory?

This question can have a varied response throughout the community whether you’re playing the Relic Hunt or the Prestige Mode.

However, if you keep a few aspects right and adapt according to the situation in your game, the Sword Dome should be quite easy to conquer in all difficulties in Dome Keeper!

I’ll help you to get those few aspects right today, through this well-informed Sword Dome Build Guide.

The weapon you use in Sword Dome is the Sword. It has a wider range of attacking prospects and upgrades; I also found it more enjoyable to use than the Laser.

In order to ace it in the Sword Dome, you’ll have to create the perfect balance between mining and defending, while also retaining the balance as the number of aliens start to increase in each wave.

I’ll be discussing about a potential route for the upgrades you can pursue, but it’s important that you consider the state of the game you are in and the gadgets you have access to.

For the initial gadget, even if you’ve unlocked all the three gadgets, I’d still go for the Shield gadget because of the defensive boost it provides to the Dome.

Along with its defensive duties, the Shield gadget will also enable to master your Sword skills by fighting off enemies without needing to worry too much about the health of the Dome.

So, as you start digging and mining in the Sword Dome, which upgrade should you get first?

The first level of Drill Strength upgrade should always be your priority when starting off in any Dome and any game mode. It is one of the best upgrades to start with in the game.

As you move deeper both horizontally and vertically under the ground, the rocks are harder to drill through and take quite a few strikes.

Increasing the power of the drill with this upgrade, for only 4 Iron, will minimize this limitation and help you mine resources faster.

The Carry Strength 1 upgrade will enable you to carry more items in one go and help you mine resources quite efficiently. You can easily get more items into the Dome in a shorter period of time. However, it will cause your speed to drop.

Countering the decrease in speed due to the previous upgrade, you can spend 4 more Iron to unlock Speed 1 for your character, enhancing the jetpack’s attributes and helping you move faster.

These upgrades are quite necessary as you progress in the game; thus, it’s a good idea to get them towards the start.

The time for further upgrades of the character will depend upon the Gadgets that you’ll be employing; we’ll take a look at it soon.

Costing only 1 Iron, you can easily unlock this upgrade and keep track of the health of your dome.

It’s quite obvious that you’ll need the Hostile Proximity meter. It lets you know how long you have till the next wave of enemies appear so that you can plan your mining accordingly.

These two upgrades are present in the second vertical line of the Dome section. Access to these is enabled when you unlock the Health attribute.

Both these upgrades are extremely important as these will regenerate the health of your dome when it’s low.

However, you should only get these when required.

The first boost for my Sword would definitely be the Slice Improvement. Not only does it improve the mobility of the sword, but it also helps to kill off some aliens with just one stab! It’ll cost you 6 Iron.

Let’s face it. All of us spam the Stab button when an alien is near the dome, right? But, it’s not as fast as the rate at which we spam!

The Fast Stab 1 upgrade can help to minimize by implementing swifter mobility and lower cooldown time.

The Long Stab can be an extremely helpful upgrade, especially against the aliens that are in the air.

The Long Stab 1 as well as Long Stab 2 upgrades will add a pretty overpowered feature to your Sword – it’ll allow you to literally extend your sword in a curvy manner towards the enemies and stab them with increased power!

In my opinion, the Long Stab upgrades are the strongest of the initial Sword upgrades available for low costs.

These primary upgrades of the Character, Sword and Dome should easily help you progress smoothly towards the start of the game.

But, along with these, what Gadgets should you deploy and how does it affect your further upgrades?

I’ll most definitely recommend you to pick the Shield as your initial gadget. The defensive attributes of the Shield is essential to the health of the Dome and protects the Dome for longer.

The upgrades to unlock for Shield would be the Overcharge Shield or the Strength. These will enable the Shield to absorb further damage in the incoming waves.

You may get the Electro Blast towards the end, if you have nothing else to upgrade.

The Shield gadget will provide amazing defensive capabilities to your Dome. If you have decent aim with the Sword, you can actually go quite a long while without having to regenerate the health of the Dome at all.

With the Shield gadget, you can keep the health of the dome as your secondary concern. You can spend the Iron, Cobalt, and Water in improving the attributes of the Sword and get the Long Stab upgrades, the Heavy Blade, and even, the Javelin.

You can also consider increasing the Jetpack speed as well as Carry Strength.

Teleport would be one of the top gadgets in Dome Keeper that I’d vouch for. Initially, the Teleporter will only allow you to move from a certain area directly to the Dome, but without any resources.

In order to carry resources through the Teleporter, you’ll have to unlock additional upgrades and that’s when the Teleporter is the strongest. The Teleport Resources upgrade is your way to go!

Similar to the Lift gadget, the Teleporter also improves mining and mobility. In that case, you can focus less on the upgrades for you character, given that you’ve unlocked the primary ones.

You should rather get the upgrades on your Sword or the Shield Gadget, which will enable you to defeat enemies quicker.

The Lift upgrade is definitely up there with the best gadgets in Dome Keeper. The sheer efficiency it provides in mining is beyond the charts and you shouldn’t miss it for the world!

You should get all the Lift upgrades as well, since these aren’t too costly and hugely boosts movement and mining.

If you obtain the Lift gadget, then you can spend lesser resources in the attributes of your character, such as the jetpack speed or carry strength.

Obtaining various other upgrades first, which help to take out enemies faster, should be you priority now, as resource-collection is much more efficient.

The Stun Laser gadget can be an offensive addition to your dome. The laser itself will attack monsters in the form of stun effects. This is enough to slow them down and gives you enough time to take them out without conceding damage.

This gadget comes with various upgrades as well, of which the Fire Endurance and Autonomy upgrades are the most effective.

The Fire Endurance upgrades will keep the Stun Laser slowing down enemies for a longer while and unlocking Autonomy activates this gadget whenever enemies are around, regardless of your presence in the dome.

While the Stun Laser slows enemies down, it doesn’t cause noticeable damage to the enemies, even with the upgrades.

Therefore, you should still unlock various attributes of your sword, but focus on those upgrades that will help eliminate enemies from a longer distance.

The dome will be struck relatively less with the Stun Laser gadget in place; therefore, you can focus on obtaining the Character or other Gadget upgrades.

There are several other Gadgets that you’ll come across. You can choose any, depending on your style of play and whichever you think will help you defeat the aliens more easily. There’s no one right answer! However, please don’t shred the gadgets to Cobalt!

The upgrades you make will determine the final outcome. I’d suggest unlocking one or two upgrades of each at section at a time and then going for the next section.

In that way, you can alternate between sections to unlock the primary upgrades.

For the next upgrades, it really depends on the gadgets that you’ll unlock.

You can follow the same route of getting one or two upgrades per section and then moving on to the next section, but do keep an eye on which sector you may be lacking, whether it’s the health of the dome or the power of the sword.

Unlocking these upgrades in a strategic manner and efficiently using up the resources that you gather is what will bring you victory in both the game modes in Dome Keeper.

The Sword Dome seemed more enjoyable to me than the Laser Dome. Even in easy difficulty, coming out on top is not exactly straightforward. Things can get sweaty and you need to be at the top of your game for the most part.

If you need any additional advice regarding the Sword Dome build guide, do leave your opinion in the comments below!