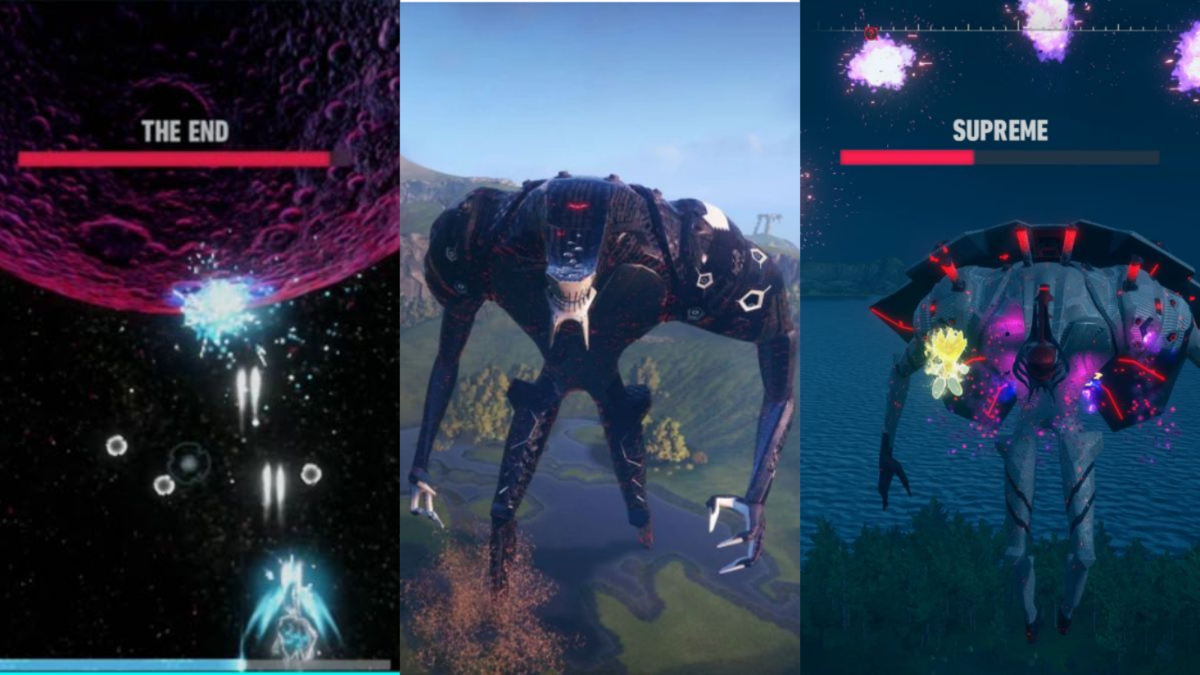 There are 5 bosses in Sonic Frontiers and each of them features similar mechanics. Specifically, Sonic has to transform into Super Sonic to be able to damage the bosses.

Also, in certain cases, Sonic will have to dodge projectiles and succeed in quick-time events.

Each boss fight is impressive in its way and features amazing visuals and music.

In this guide, I will list all bosses in Sonic Frontiers, based on the order they are encountered in the game.

Giganto is the first main boss encountered in Sonic Frontiers. Due to its massive size, Sonic is unable to face it head-on.

Instead, players will have to climb on top of Giganto and reach its head to obtain the Chaos Emerald located there. To climb faster, use the rings located on Giganto’s back.

After obtaining the Chaos Emerald, you will be able to transform into Super Sonic. With various new moves unlocked and the ability to face Giganto head-on, it’s time to start using your combos. The boss has no core mechanics, so keep hitting it until it’s dead.

Players will be ambushed by Wyvern in the desert. First, they will need to run away by following the path ahead of them, until a cutscene occurs.

Now, players will need to get to higher ground and attack Wyvern via homing attack. This will allow Sonic to transform into Super Sonic.

Climb on top of the tower in the middle of the arena and perform a homing attack towards Wyvern. Then, follow the red path until you get the chance to jump on top of it and claim its Chaos Emerald.

Now that Wyvern is vulnerable, follow it around until you get the chance to unleash your combos and defeat it.

If you’re struggling with the Wyvern, consider checking out our in-depth guide on how to beat it.

For the Knight boss, start by running away from it until a cutscene occurs showcasing a volcanic eruption. Then, the boss will start attacking Sonic. To get on top of it, wait for the boss to extend its arm and jump on top of it.

Then climb on its head, get the Chaos Emerald, and transform into Super Sonic. After that, use a combination of quick-time-events and combos to defeat the Knight.

For this boss fight, things are more straightforward. Sonic can transform into Super Sonic right off the bat and the fight begins right away.

Focus on dodging and parrying Supreme’s attacks and use your combos whenever you find an opening. Try and destroy the rocks hovering Supreme, wait for the boss to knock you back, and then parry the incoming projectiles.

Your dodging and reaction skills will be put to the test in this boss fight since you have to destroy the orbs and avoid any lasers moving around you.

For the final part, succeed in the quick-time-events and you’ll defeat the End.

To sum up, these are all the main bosses in Sonic Frontiers. All of them are massive in size and can only be fought by Super Sonic.

Each boss fight is memorable in its way and defeating these bosses can be extremely satisfying.

To make fighting bosses easier, consider checking out our guide on how to level up fast in Sonic Frontiers. You can max out all your skills within a few hours.

Which was your favorite boss in Sonic Frontiers? Did you have any trouble defeating it? Let us know in the comments below.