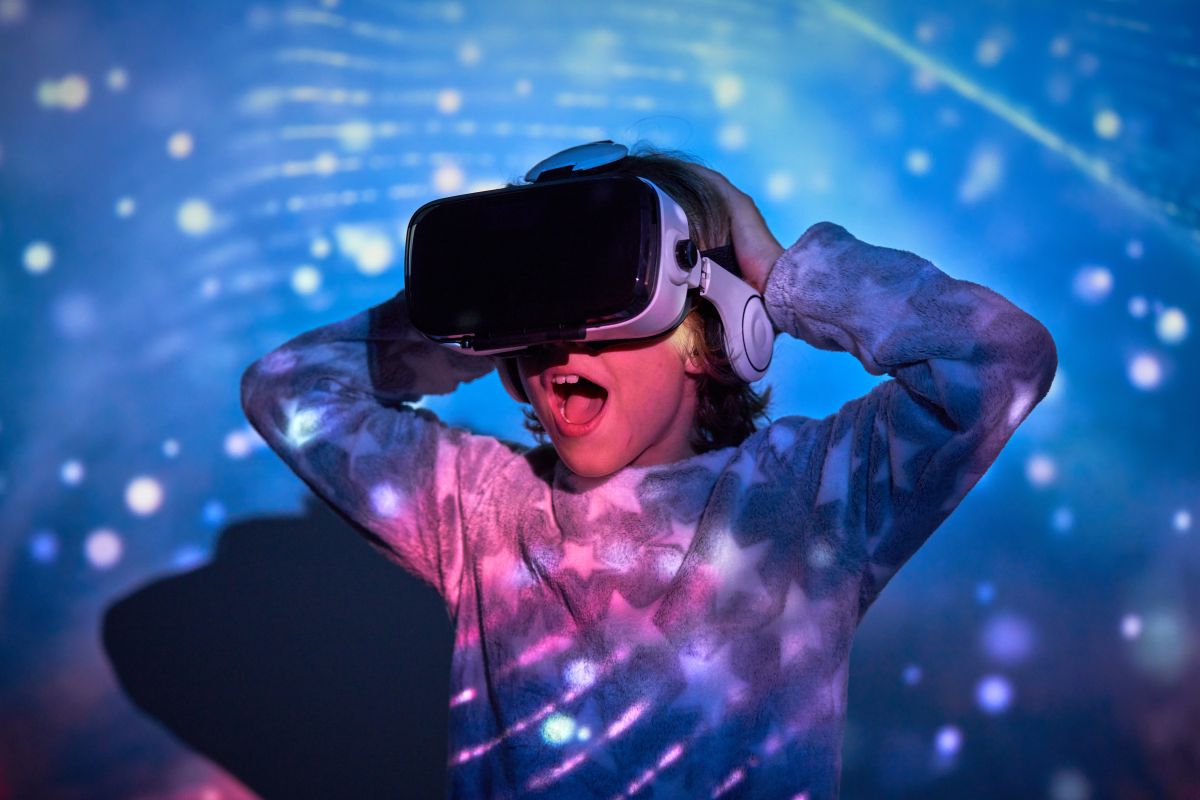 Facebook’s rebranding to Meta has breathed new life into the virtual/augmented reality industry. Headsets previously relegated to niche games have now diversified into other sectors.

With virtual reality on the rise again, one popular question for newcomers and veterans alike is what is the best VR headset to watch movies?

Notice: We get commissions for purchases made through links in this article. This has no editorial impact and you don’t pay extra.

The Oculus Quest 2 is the best headset for watching movies. Unlike many of its competitors, it strikes the perfect balance between affordability, build quality, and performance to provide a premium viewing experience at a reasonable price.

Read on to learn what makes the Oculus Quest 2 the best headset for watching movies and what other alternatives are out there.

We’re going to look at the top three recommendations below based on a few important decision factors: Performance, Comfort and Cost. These will help you make the best choice based on your budget.

With competitors like the Reverb G2 and the Vive Pro 2 (see below), it can be easy to forget about the Oculus Quest 2.

But while it doesn’t soar to the same heights as its competitors on this list, it’s no slouch either.

It ships with an 1832 x 1920 resolution, and its 72hz refresh rate can be upgraded to 120Hz for a significantly better viewing experience.

The importance of this cannot be overstated. While most tethered headsets require you to maintain a degree of closeness to your computer or console, a fully wireless system like the Quest 2 makes you free to roam about and find the best possible spot for you to settle in and watch your movie.

The benefits and comforts of the Oculus do not end there. Despite costing significantly less than its peers, it still manages to deliver that premium feeling you would usually associate with the more expensive headset options.

That said, the Oculus isn’t perfect. The way its IPD adjustment works can be annoying due to the lack of accessible sliders that you can use without taking off the headset.

Instead, its sliders require you to take the headset entirely off, choose from one of three adjustment levels, and put the headset back on after to check.

This problem, coupled with the fact that its audio setup uses speakers instead of headphones, can ruin an almost perfect experience.

The Oculus Quest 2 is the cheapest of the three at the moment of writing. It sells for an especially low price considering its competitors’ price tags and the suite of features it has to offer.

Although the Quest 2 is the cheapest of the three, it still feels like it could be in the same price range as its pricier counterparts.

Sure, it’s not the best performer out there, but it’s not below industry standards and you will have no reasons to complain about it, in all honesty.

When it comes to performance, the best of the best is the HTC Vive Pro 2. Almost everything about this headset screams quality, from the PPI to its resolution. And based on reviews you can read on Amazon from others who tried it, I am not the only one that’s impressed with its high quality.

HTC has gone to great lengths to ensure that none of its competitors can do anything but wonder how exactly they managed to pack so many features into one headset.

All of these features combine to give you one of the best VR movie viewing experiences you can find. They, along with the 120-degree field of view, also make the HTC a difficult contender to beat.

The Vive Pro 2 is up there with the best when it comes to comfort. One highly praised feature commonly overlooked by other headsets is the presence of a way to account for interpupillary distance (IPD).

The IPD accounts for the space between the pupils of your eyes. The closer you get the slider to match your IPD, the better your viewing experience.

Honestly, the Vive Pro 2 has the look of your average VR headset; nothing stands out at first glance. It sports the same simple design as its predecessor, except it forgoes the previous blue finish for a black one. It also sports a locking system to hold the headset in place and provide a snug fit.

While it might not seem mind-blowing at first glance, putting on the headset makes you understand why it’s such a popular choice. The attached headphones give you an amazing audio experience, and the feel and comfort of the headset when worn just screams premium.

On the flip side, the attached cable can make life very frustrating for you. VR is meant to be an immersive experience, and that immersion can be easily broken by a cable that keeps flopping about everywhere as you try to watch a movie.

The HTC Vive Pro 2 is by far the most expensive of the three. And unlike the other two, I don’t think it justifies its price tag particularly well.

Don’t get me wrong; it’s admittedly one of the best contenders on the market. However, it’s so much more expensive for marginal improvements that I’d be hard-pressed to recommend it as a viable option unless cost is not a consideration.

The Vive Pro 2 costs a bit much when you consider that you have to pay almost the same price for additional stations and controllers that most other brands ship with. This way, the costs start to add up.

The HP Reverb G2 might lag behind some of its competitors in a few respects, but the one place where it outdoes most of its competition is in performance. While the Vive Pro 2 gives you a surprising amount of viewing pleasure, the Reverb G2 really feels like it was built from the ground up with viewer satisfaction in mind.

With over 9 million pixels, 2160 x 2160 resolution, and a beautifully engineered LCD panel, the Reverb G2 is the competitor to beat when it comes to movie quality. If its positives ended there, it would still be a top contender. However, the Reverb G2 goes even further to enhance the viewer experience.

Not only does it ship with such great graphical fidelity, but it also comes with enhanced audio quality to really make you feel every moment you watch in a movie. If the Vive Pro makes you feel like you’re sitting in a cinema, the Reverb G2 puts you inside the movie.

The HP Reverb G2 also delivers a wonderful viewing experience. One of the core components of its premium experience are the attached headphones on the headset. While many other brands skimp when it comes to sound quality, HP has done everything in its power to ensure that the audio quality they deliver matches the visual quality.

The Reverb G2 is particularly great for long viewing sessions. A snug fit and comfortable feel go hand in hand to ensure that you can watch movies without needing to take breaks even if they last over three hours. Unfortunately, it also uses a wired system.

Next up is the HP Reverb G2. If it wasn’t for how cheap the Oculus Quest 2 is, the HP Reverb G2 would be regarded as the most budget-friendly option. But with its price being higher, it still might not be the best option for newcomers or those with an extremely tight budget.

What Makes a Good VR Headset?

A good VR headset should excel in three key areas: performance, comfort/build quality, and pricing. While it doesn’t necessarily have to be the best in the market in all three aspects, its pricing must be justified by the performance and build quality.

The Oculus Quest 2 is the best overall option when it comes to checking the most boxes in the above criteria. However, the HTC Vive Pro 2 and the HP Reverb G2 outperform it in some aspects.

The reason the Oculus Quest 2 is the best choice for watching movies is pretty simple: value for money. It’s also my top choice for the best VR headset for VRChat, so it’s definitely versatile – not limited to offering a great movie playback experience.

As someone shopping for a VR headset for this purpose, you don’t necessarily have to break the bank on the best option out there. Instead, you want above-average performance and build quality at a reasonable price, and the Quest 2 fits the bill.

It combines wonderful quality with incredible value for money, and you would be hard-pressed to find a better alternative at the same price.

While it might not outrightly outshine many of its competitors, it is one of the few headsets that does everything well without cutting corners.

The reason the Oculus Quest 2 is often overlooked is a combination of the strength of its competitors in some aspects and efficient marketing by other brands.

But when you consider that it’s almost half the price of most of its nearest competitors, it easily catapults to the apex of VR headsets.

But since everyone has different priorities and intended uses, you might need an alternative. If that’s the case, use the table below for quick reference. It’s essentially a summary of how the Oculus Quest 2 compares to two of its biggest competitors.

Oculus spearheaded the VR wave almost a decade ago. Despite being acquired by Facebook (now Meta), their headsets still sit comfortably at the top.

So if you’re in the market for the overall best VR option for watching movies, look no further than the Oculus Quest 2. That said, the Vive Pro 2 and Reverb G2 are still great options, especially if you don’t mind the extra cost.