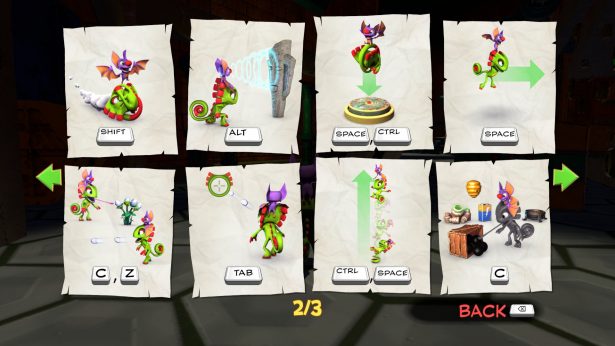 Yooka-Laylee released two months ago to some rather lukewarm reception. Many review sites claimed that while the game was a decent attempt at reviving the 3D platformer genre long thought to be dead, Yooka-Laylee was still rooted in archaic design choices and featured generally unfocused game play. While it seems like the core gameplay and design haven’t changed much, Playtonic Games listened to the feedback nonetheless and pushed out a new update that will bring some nice polish to the whole game, hopefully making the game a more pleasant experience.

For starters, character dialogue can now be fast-forwarded. Yooka-Laylee features the rapid-fire gibberish noises that were seen in Banjo-Kazooie, and unfortunately a lot of people found it be more annoying than charming. Additionally the rate at which these voice effects play has been lessened, and of course you can now also just bypass these cutscenes altogether when you’re not feeling the wacky voices.

The camera has also been reworked for smoother control. There’s an all new mode that sort of works like a chase camera where it’ll auto adjust to where you’re running to. The camera assist is minimal so you still have full control over the camera. Playtonic has also reduced the amount of scripted fixed camera angles, return control over to you during specific moments. In addition to the regular third-person camera, the first-person camera has receive some new aiming controls to help it feel more natural.

Among these quality of life improvements this update also fixes a plethora of bugs, including potentially game breaking ones. One particular instance was Pagies not saving after exchanging casino tokens during the Capital Cashino level. If you’ve been affected by this bug, do not worry – you don’t have to start over for this update. Simply re-entering the zone will replace all of your missing tokens, according to Playtonic.

I was one of the backers for Yooka-Laylee, and I guess it worked out that I’ve put off playing the game for this long. Being a fan of the original Banjo-Kazooie games, I was excited to try Yooka-Laylee out, even after all of the mixed reception it received. I’m not sure if all of these improvements warrant another playthrough for those that already beat the game, but I’m ready to hop in to see what it’s all about.

As a bonus, Yooka-Laylee is 25% off on the Steam store if you’re interested. You can also view the full patch notes on the official Playtonic Games website.