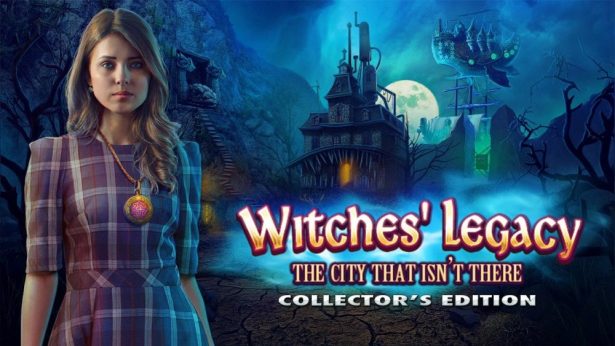 I’ve been a fan of the Witches’ Legacy series and really enjoyed the games in the series, especially before the main characters were changed to the current family. However, I decided to give this game a try and it was officially the first hidden object puzzle adventure I have played this year.

Read on to find out in my Witches’ Legacy: The City That Isn’t There review how I felt playing the game and what’s my opinion on it.

Once again you play as Jack who, together with his shapeshifting friend (who turns into a ferret), must save his mother who disappeared into the “city that isn’t there” – Salenville in our case.

The adventure quickly turns into one featuring supernatural creatures, witches and other surprising – or just strange – encounters.

So yes, the Witches’ Legacy: The City That Isn’t There doesn’t really strive to deliver an original story.

And the story doesn’t get a lot better as you play: you have cliche over cliche: with a few minor exceptions which I won’t reveal in order not to spoil your experience, the story of the game seems uninspired and it really can’t draw you in.

Which is really a shame – those who have played games in the Witches Legacy series know that the developers can do a lot more and can actually make you care for the characters and your adventure! Well… not so much this time!

Those looking for an intense challenge won’t get it from the game either. The hidden object scenes are nice but easy, just as the minigames and the entire game. You can easily cruise through it without many – if any – real obstacles.

However, I don’t consider this as a bad thing: I am playing these games to relax and for their entertainment value so I don’t want to be stressed to much with puzzles I can’t solve or which take ages to complete.

But what I like is a good balance between slightly more challenging gameplay elements and easier ones and Witches’ Legacy: The City That Isn’t There seems to deliver more of the latter. Enjoyable and nice, but on the easy side – worth to keep this in mind!

Graphics are really nice in this game, though, just like the animations. The blue hues are a bit too much in some cases, but they fit the story and the game well, so I won’t complain – even though I wouldn’t mind if there wasn’t so much blue in the game!

The sound doesn’t manage to match the top quality of the graphics, unfortunately. The voice overs seems to be recorded by some really bored actors and the soundtrack doesn’t excel either.

To top that, we have our shapeshifting friend – the ferret – which becomes really annoying very fast. She’s useful during our adventure, but also very distracting as she keeps moving in the bar below and makes annoying sounds.

Witches’ Legacy: The City That Isn’t There – the Collector’s Edition – comes with all the goodies one expects from one. We have morphing objects which are, in my opinion, the most challenging items to find in the game. We also get easy to find Collectibles, wallpapers, art images and a bonus chapter.

All in all, Witches’ Legacy: The City That Isn’t There is a good game. Not an amazing one – especially for the fans of the series who will see a small decline in terms of quality – but definitely great for those who are just starting to play hidden object adventures or those who, like me, prefer less challenging games for their entertainment & relaxation values. And in terms of entertainment and relaxation, this game delivers just what you need!