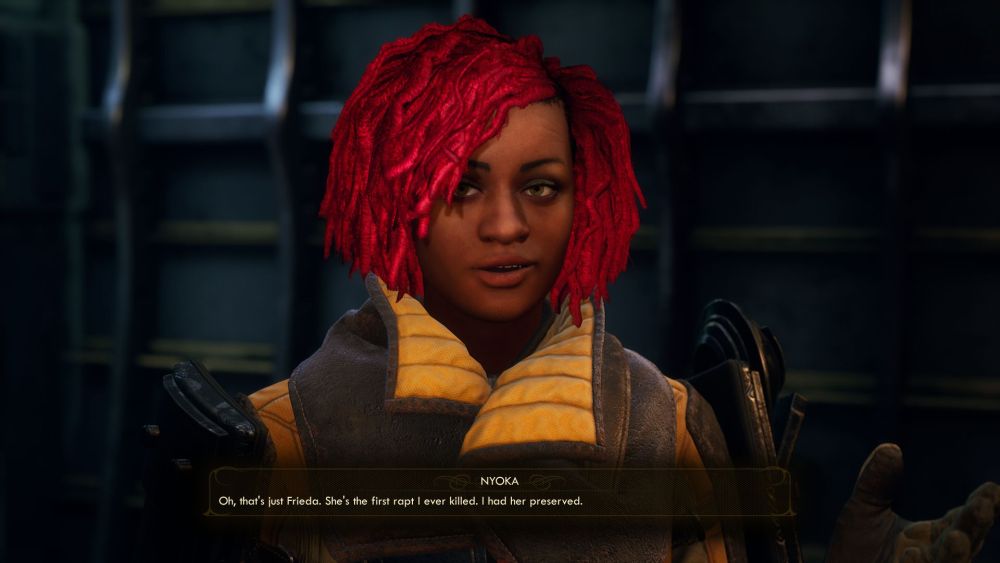 Nyoka is one of the companions that you unlock in The Outer Worlds and one of the most fun to have around, too.

In today’s article we are going to learn everything about Nyoka: her Quest line, details about her as a companion and everything else you need to know.

We have already talked about her in the companions guide that I published recently, but now I feel that we can go a bit more in depth with her and focus on all the Pros, the Cons, the Stats and especially her Companion Sidequest line that she comes with (a really nice one too!).

The big game hunter who likes to drink a lot is probably the final companion that you get to unlock in the game.

That is if you are lucky enough not to get into the Nyoka bug that we have talked about in a previous article.

But if all goes well, your visit to Monarch will result in you getting Nyoka as a companion, after completing a small quest for her, one that involves getting her some anti-hangover pills. Fun way to start an adventure!

Either way, she comes with three unique perks (like most companions in the game), which are listed below:

She also has a special ability (the special attack) called Barrage: Nyoka uses her personally modified LMG to deal damage to her target and set enemies near it ablaze.

This also gives the target a -30% Armor rating for 1.5 seconds and Burn effect (Damage over time).

She proved to be pretty efficient when I had her around (and I generally have her around since she’s one of my favorites) – not only that her special attack is fun to watch and extremely destructive, but all her perks are useful.

Sure, if you haven’t chosen already a character path with many points in the Dialog skills (where Lie is), you will probably not get a ton of benefit from her +10 to Lies – but every little bit helps.

However, she is great when creature hunting and especially for keeping the sounds low, allowing you to sneak past enemies or take them out by surprise.

I didn’t check out Nyoka’s stats early on in the game (so I don’t have a screenshot from there), but I do have one from level 20 which is still relatively early:

Of course, these stats are there just to have something to look at, as everything there is influenced by the Perks you select for her (she’s my only companion that didn’t get the health boost perk, for example), weapons and armor.

But all in all, there is nothing to make Nyoka’s stats much worse or much better than the other companions. So she will be just as useful as others equipped similarly.

Nyoka’s companion quest line is called “Star-Crossed Troopers” and it offers some backstory on Nyoka’s past and her former team. Of course, this quest line will only be available if you recruit Nyoka as your companion on Monarch.

Here’s a guide to this quest line (to be updated as I complete it):

1. Visit Hayes’ Grave with Nyoka – Once you’re out and exploring the Monarch surroundings, you will activate the quest by talking to her and the first step is visiting Hayes’ grave.

There’s quite a walk to it and there will be some creature killing involved, but the good news is that you can complete some other side quests along the way.

When getting to Hayes’ grave, expect to fight some more creatures in the area, but nothing you can’t easily handle.

2. Give Nyoka the Medallion – after examining the grave, you will have to give Nyoka the medallion to unlock the next part.

3. Ask Hiram for Help – You will have to travel to the Information Broker (you will again visit him during other missions) and once you get there, he will give you the details on the locations of the graves of Nyoka’s other team members.

4. Search the Outpost – You will have to travel to the Emerald Vale near Edgewater to find out what happened to her colleagues, Rebekah and Anders.

This is as far as I got with her Companion quest line – but as I said, I will update this guide as I progress.

Even though she’s not getting a lot of love from the community, Nyoka remains one of my favorite companions: she looks good, she has an interesting past and a nice companion quest line and is really useful in combat – both through the damage she deals and special ability, but also from the bonuses she gives your character through her perks.

What do you think about Nyoka, though? Is she your favorite too or you prefer other companions to have around?