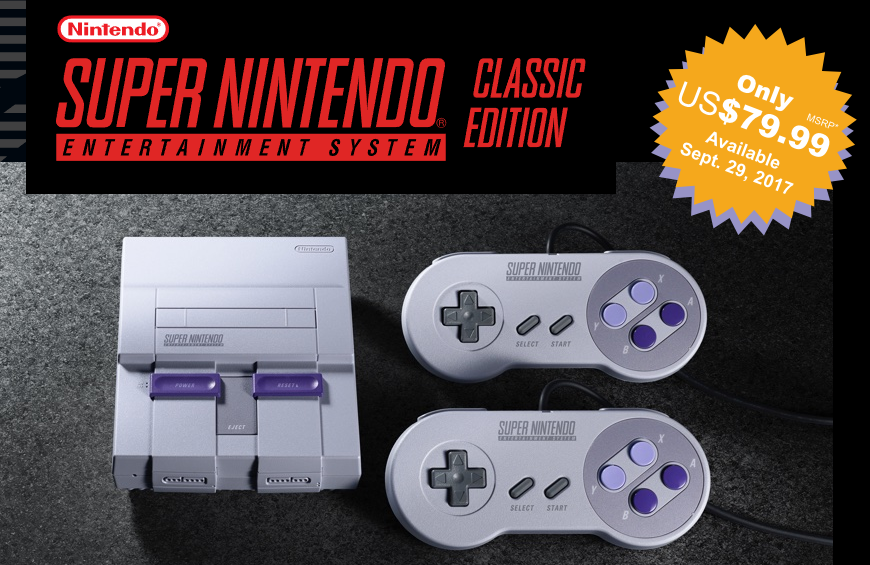 After many discussions, rants, and rumors floating around about the fate of Nintendo’s Classic Edition line of products, Nintendo themselves have confirmed that the glorious Super Nintendo Entertainment System will be getting a Classic Edition just like the NES. The SNES Classic Edition will be available in the US on September 29th and includes an all-star line-up of games including critically acclaimed titles like Super Mario World, Super Metroid, and The Legend of Zelda: A Link to the Past, among others.

Two classic SNES controllers will be included with the console, so bring a friend over to enjoy awesome games straight out the 90’s. Much like the NES Classic Edition, the SNES Classic Edition will use the same ports that the Wii Remotes did, meaning that you’ll be able to use your old Wii Classic Controller and Classic Controller Pro if you’ve still got them lying around. I mentioned this the first time around, but it’s amazing that you can still get mileage out of controllers that are two generations old now at the point.

But anyways, back to the most important part: the games! If you grew up in the 90’s you’ll recognize a lot of these big hits. Here’s the full list: 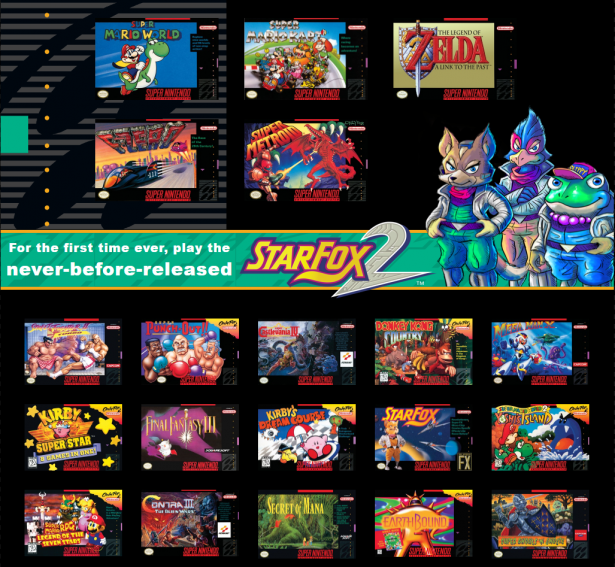 We weren’t kidding when we said this thing was super-charged with lots of big names! You’ve got Capcom’s flagship Mega Man X and the super hard platformer Super Ghouls’n’Ghosts. Square-Enix threw in their fantastic co-op action RPG Secret of Mana and arguably the greatest 16-bit Final Fantasy game, Final Fantasy VI. Konami was a big name during the 90’s too, so of course Super Castlevania IV and Contra III: The Alien Wars are here as well.

Last but definitely not least, we have Nintendo’s hall of champions to celebrate. Whether you’re an old school fan who has played through these games many times or a new comer interested in Nintendo’s history, you’re bound to be in for a treat. Something that came quite a surprise to me though was the inclusion of the never-before-released Starfox 2. This hidden sequel to the 3D space shooter was near completion when it was ultimately canceled, but now many fans will be able to experience it for the first time ever! Starfox 2 featured an interesting change from the original game. Classic Arwing shooting action was still there but now the game tasked you with defending Corneria from Andross’ bombardment, and this was done through a pseudo-RTS perspective. It’s really interesting and pretty fun, so check it out if you get your hands on an SNES Classic Edition!

Speaking of which, I know this is a sore subject for many – including myself since I wasn’t able to get a NES Classic – but Nintendo has stated that they’re producing many more units this time around. Hopefully this remains true so that everyone who wants one should be able to get one. We’ll see come September, but this doesn’t mean you should slack off! These things are still probably going to sell out insanely fast so prepare yourself if you’re hoping to snatch one!