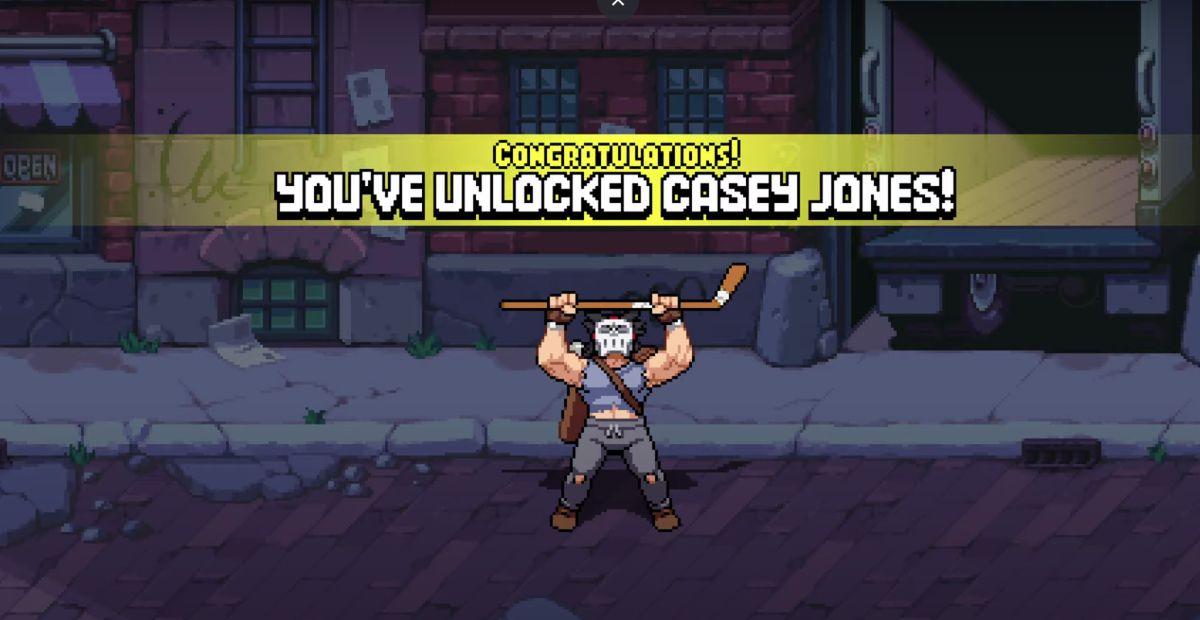 The only unlockable character in TMNT: Shredder’s Revenge (so far at least) is Casey Jones, the hockey stick-wielding good fella.

Today, I’m going to teach you how to unlock him in the game – but also provide an important piece of warning for when you do so.

But first, let’s get done with the otherwise simple task:

How to get him in Shredder’s Revenge

In order to unlock Casey Jones in TMNT: Shredder’s Revenge, all you have to do is to complete the game with any character on any difficulty level. It’s that easy – so you can make it even easier by choosing to play the easiest game mode available.

After completing the final episode in the game, he will be available for selection in new games, both in single player and multiplayer.

And he’s a really well balanced character, with great reach and nice attacks and combos. I particularly like how getting into the combos, you get to use his baseball bat and signature hockey stick to take advantage of his range.

Here are his stats, in case you want to check them out before unlocking him:

But there’s one important thing to have in mind, and I’m going to highlight this below in case you’re just scanning through the article (don’t worry, we all do that nowadays).

You can lose Casey Jones after unlocking him!

Yup, you’ve read that right – you can lose him if you’re not careful. Fortunately, it has nothing to do with your playing skills or anything else, but you do have to be careful.

This might be a bit unclear (although you’ll still get an extra warning if you make the wrong choice). And the wrong choice here would be starting a new game from scratch. Choose to continue instead!

If you don’t choose the option to carry over, you will not only lose all current progression, but you will also no longer have Casey Jones unlocked and you’ll have to complete the game once more to get him. So pay attention to this!

Casey Jones is a really good character in TMNT: Shredder’s Revenge and he’s easy to unlock if you like the game.

When you do so, you also get an achievement and later on, playing the new character, you will get a second achievement in the game.

Hopefully you found this useful. But if something is still unclear, don’t hesitate to let me know by commenting below and I’ll do my best to give you an answer.