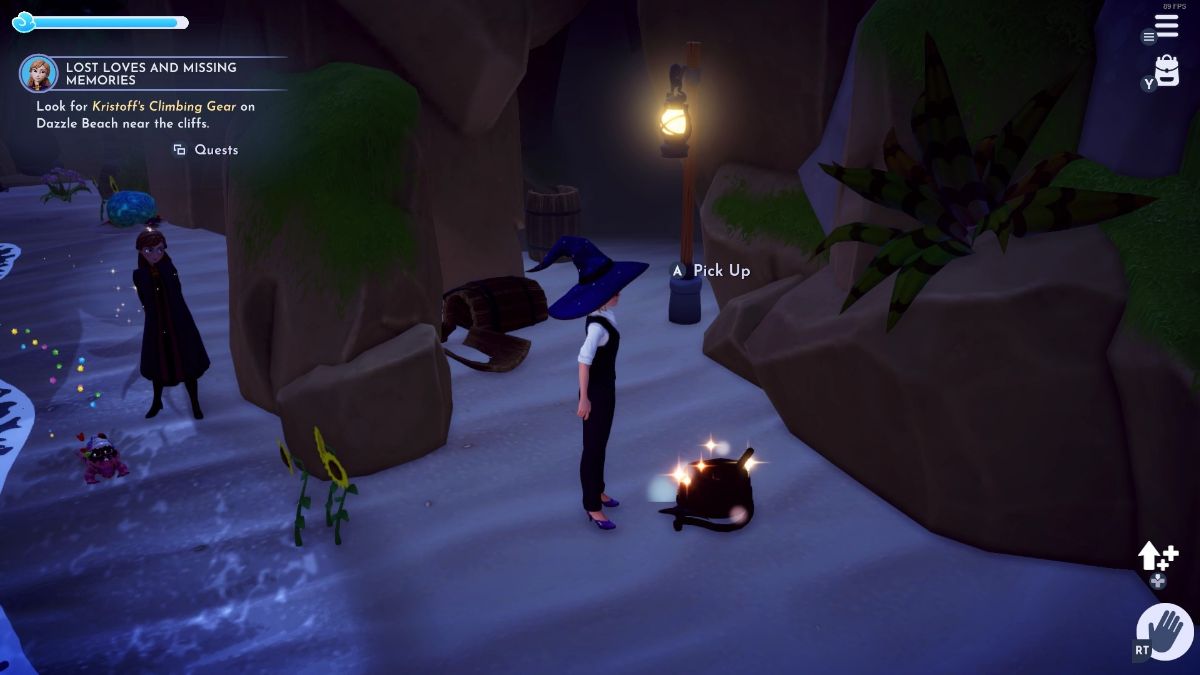 Based on previous quests, Kristoff has lost his memories with Anna and now we need to help him remember again.

In this guide, I’ll explain where to find Kristoff’s Climbing Gear, which materials you’re going to need to repair them, and where to find everything.

Where to Look for Kristoff’s Climbing Gear

When starting the quest, players will need to follow Anna and wait for her to talk to Kristoff. Shortly after, the first part of the quest will begin.

If you haven’t unlocked Ursula yet, consider checking our guide on how to find Ursula, solve her puzzles, and progress her questline in Disney Dreamlight Valley.

While it’s not essential to progress Ursula’s questline to find Kristoff’s climbing gear, it’s a key part of the main story that has to be done sooner or later.

Now that you’ve found Kristoff’s gear, let’s move to the next step of the quest.

How to Repair Kristoff’s Climbing Gear

For the second part of the ‘Lost Loves and Missing Memories’ quest, players will need to repair the newly found gear.

Specifically, they will need to collect the following materials:

Let’s see how to get each of the required materials.

How to Get Hardwood

For hardwood, players need to travel to any of the mid/late-game biomes, including Forest of Valor, Glade of Trust, Sunlit Plateau, Frosted Heights, and Forgotten Lands.

Hardwood can be found on the ground or by breaking mushroom logs. Gathering 8 pieces of hardwood should be fairly easy, as players can find all of them in the same location.

How to Get Fabric

How to Get Rope

As for the rope, players can craft it from fiber, which can be crafted from seaweed. For Seaweed, all you need to do is fish anywhere that isn’t a fishing hotspot.

There’s a 50/50 chance that you will either get seaweed or a random fish. For 3 ropes, you are going to need to fish 5 seaweed. Then, craft them into 25 fibers, which can be crafted into 3 ropes.

How to Get Iron Ingots

Lastly, iron ingots are crafted from iron ore, which is gained by mining the dark rocks in Forest of Valor, Glade of Trust, Sunlit Plateau, Frosted Heights, and Forgotten Lands.

Just mine any of the dark rocks and you will get iron ore. Keep in mind that each iron ingot requires 5 iron ores.

And that’s all. After you’ve gathered everything, give the materials to Anna and the quest will be completed.

All it took was traveling to Dazzle Beach near Ursula’s Cave to gather Kristoff’s tools and then collecting the required materials to repair those tools.

What did you think about Anna’s questline? Are there any other quests you enjoyed in Disney Dreamlight Valley? Let us know in the comments below.