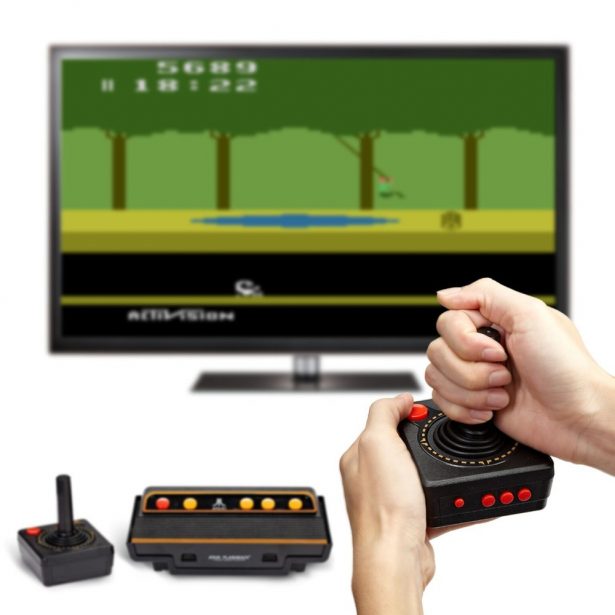 It was yesterday that we’ve talked about the upcoming Ataribox – a still-secret console from Atari – and today we have to announce yet another Atari console. This time, though, things are a bit more different as the console is being created and released by AtGames. And it’s not coming alone!

These new releases are HD versions of their classic counterparts: the Atari Flashback 8 Gold and the Sega Genesis Flashback. Each console will include a built-in selection of games released in the past, as well as great new features that modern gamers will love. And since it’s two products that we’re talking about – in order to keep things as clear as possible, let’s detail each one below.

The upcoming console will include 120 built-in all-time favorite Atari 2600 games like Activision’s Pitfall! and Taito’s Space Invaders, Kaboom, Centipede and much, much more. Basically, it’s all the nostalgia of the past – for those who were lucky enough to play the originals – coming in a single package.

Compared to the original, the console is also getting some upgrades. Apart from the 720p HDMI output, you also get wireless controllers designed to look like the originals, as well as two legacy controller ports for optional wired joysticks or paddles. Scan line filtering, and a save/pause/rewind feature for every game complete the list of features that you will love.

Here’s a video showing a bit of the upcoming Atari Flashback 8 Gold console:

This is indeed an amazing remake that retro gamers will love. Not only that it comes with 85 built-in games, but it also has an integrated cartridge port that plays almost all of your favorite Sega Genesis and Mega Drive original cartridges. Even if you don’t have the originals cartridges – or you don’t want to use them anymore – you will still have access to amazing classics like the Sonic Series, the Mortal Kombat series, Shining Force or Phantasy Star to mention a few.

Just like the Atari Flashback 8 Gold, the Sega Genesis Flashback will come with wireless controllers built to look like the originals. 720p HDMI output, scan line filtering, and a save/pause/rewind feature all games are included. A must have for retro gamers looking to relive the good moments of long gone times.

Both new consoles created by AtGames are scheduled for a Fall 2017 release and they’ll be available for purchase at all major retailers. Unfortunately, we have no pricing details at the moment, but we’ll keep you updated!